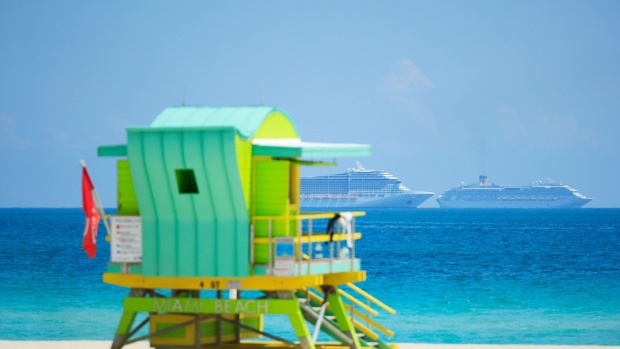 MIAMI, FLORIDA - MARCH 26: The Costa Favolosa cruise ship (right) is seen off the coast on March 26, 2020 in Miami Beach, Florida. According to reports, two Costa ships, the Favolosa and the Magica, are anchored off the coast of Miami with approximately 30 people experiencing flu-like symptoms of COVID-19. (Photo by Cliff Hawkins/Getty Images) , Photographer: Cliff Hawkins/Getty Images

(Bloomberg) -- Sick crew members aboard two Costa Cruises ships are disembarking in Miami after failing to find other ports that would take them.

A Miami-Dade Fire Rescue boat took several people off one of the ships, which was anchored away from port, and brought them to the Miami Beach Coast Guard station, a spokesman for the county said. The passengers had left earlier.

Costa, a division of cruise-line giant Carnival Corp., had been struggling to find a port in the Caribbean that would accept those on board, before finally working out a deal with authorities in Miami, the company said Thursday.

As many as 13 crew members on the Costa Magica and Costa Favolosa who need medical attention will receive treatment there. The ships will remain three miles offshore until Saturday as Costa organizes flights to Europe and Asia to repatriate the majority of the crew members. A small number will remain on board to maintain the vessels.