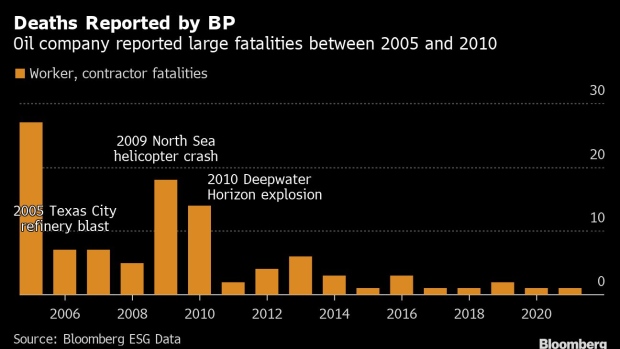 (Bloomberg) -- BP Plc said two of its workers died in a fire at its oil refinery in Oregon, Ohio.

The fire was extinguished Tuesday night and the refinery, which supplies the Midwest with gasoline and diesel, has been shut, company spokesperson Megan Baldino said in an email. She did not elaborate on the extent of the damage or which units were impacted.

The refinery is one of the oldest in the US, originally built in 1919. This is the second fire since late August at two of BP’s three US refineries. The blaze began early Tuesday evening at the plant’s largest crude unit, according to Wood Mackenzie’s Genscape.

The company is in the process of selling its 50% stake in the Ohio refinery, known as BP-Husky Toledo, to its joint-venture partner Cenovus Energy Inc.

“We are deeply saddened by the deaths of two staff at the BP-Husky Toledo Refinery,” a Cenovus spokesperson said. “Regarding the transaction, right now our focus is on supporting BP and its people.”

Prices for diesel delivered into the Buckeye Complex in Hammond, Indiana, jumped 20 cents against Nymex futures Wednesday, traders said, while Canadian heavy crude -- which supplies the refinery -- collapsed to the weakest level since April 2020. The spread between New York oil futures for November and December delivery narrowed.