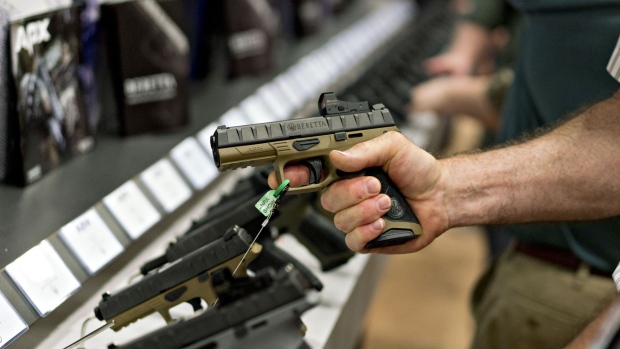 An attendee holds a Fabbrica d'Armi Pietro Beretta SpA pistol at the company's booth during the National Rifle Association (NRA) annual meeting in Dallas, Texas, U.S., on Saturday, May 5, 2018. President Donald Trump delivered a strong sign of support for the National Rifle Association at its annual meeting on Friday, as gun-rights advocates regroup in the wake of the mass shooting at a Florida high school. Photographer: Daniel Acker/Bloomberg , Bloomberg

More than two dozen banks have said they can continue working with Texas and its local governments in the wake of new state laws seeking to punish financial institutions that have policies aimed at the gun and fossil fuel industries.

Barclays Plc, TD Securities, Stifel Financial Corp., Wells Fargo & Co. and Jefferies Financial Group are among those certifying that they don’t run afoul of the new laws, according to letters to the state attorney general compiled by the Municipal Advisory Council of Texas, an industry association. The advisory council posted the letters on its web site.

The assertions signal that there are plenty ready to fill the breach left at least temporarily by Bank of America Corp., Citigroup Inc. and JPMorgan Chase & Co., all of which have seen business grind to a halt in Texas since the new laws took effect in September.

A Republican-backed gun law bars the state and local governments from working with banks that have moved to curtail ties to the firearms industry, an effort to retaliate against them for weighing in on the national debate on gun control. A separate law restricts state contracts with those that have shunned fossil-fuel producers, a major industry in Texas.

The laws promise to shake up the public finance business in Texas, whose swift growth has made it the second-largest issuer of state and local government debt, with some US$58 billion sold last year.

The laws have created legal uncertainty for other banks about whether they can still work for Texas governments.

Citigroup, which has temporarily stopped seeking Texas work, has said it believes it will be able to comply with the law. JPMorgan has said it currently can’t bid for most Texas work. Bank of America has declined to comment, but it hasn’t underwritten any Texas bond deals since the start of last month, according to data compiled by Bloomberg.

Bank of America and Citigroup are listed as not yet posting the letter regarding the effect of the gun and fossil fuel laws on their ability to do business in Texas.