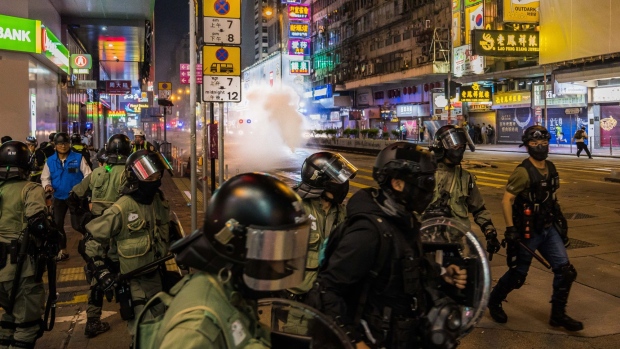 HONG KONG, CHINA - NOVEMBER 10: Riot police retreat as a water cannon spray on November 10, 2019 in Hong Kong, China. Hong Kong slipped into a technical recession on Thursday after anti-government demonstrations stretched into its fifth month while protesters continue to call for Hong Kong's Chief Executive Carrie Lam to meet their remaining demands since the controversial extradition bill was withdrawn, which includes an independent inquiry into police brutality, the retraction of the word "riot" to describe the rallies, and genuine universal suffrage. (Photo by Billy H.C. Kwok/Getty Images) , Photographer: Billy H.C. Kwok/Getty Images AsiaPac

The two teens fell to the ground and were apprehended by officers, the newspaper reported, citing an eyewitness at the scene. Police had no immediate comment.

MTR Corp. suspended part of the East Rail running from the New Territories to Kowloon. The disruption was “due to obstruction on tracks and train equipment being damaged,” the rail operator said on its website. Light rail services were also affected.

The weekend protests intensified in the city after police fired a warning shot Friday in a clash with demonstrators. Activists vandalized shops and train stations, and threw Molotov cocktails at a police station in response to the death of a student during a recent protest. Demonstrators set up barricades across roads in several districts, hurled hard objects at police and damaged shops and public utilities on Friday, officials said in a statement.

The police said tear gas and special vehicles were deployed to disperse the crowds. The arrests were for offences ranging from unlawful assembly to possession of weapons.

“Police reiterate that no violent behavior will be tolerated,” the police said in a statement. “Police will continue to take resolute enforcement action so as to safeguard the city’s public safety and bring all lawbreakers to justice.”

The student suffered a brain injury and died Friday after falling from a parking garage near a demonstration where police used tear gas to disperse a crowd. Hong Kong police officials denied a report that their officers had chased and pushed the student. A memorial drew tens of thousands of people.

“Considering it’s the first death that’s happened at a police-people confrontation scene, it will certainly add fuel to the already strong fire of anger -- particularly when people generally have absolutely no trust in the system and the police,” said Alvin Yeung, a pro-democracy lawmaker.

Police also stormed into the popular Citywalk Mall in ​​Tsuen Wan after protesters vandalized shops deemed to be “pro-Beijing.” Some retailers closed earlier than usual.

Beijing will ensure only people loyal to it will become Hong Kong’s chief executive, damping the hopes of the pro-democracy activists as tensions rise after five months of historic unrest in the city.

The city’s inability to implement Article 23 -- a law that prohibits acts of treason and subversion against the Chinese government -- and its failure to set up units to follow through were the main reasons separatist movements are on the rise, Zhang said.

In 2003, the Hong Kong government halted implementation of the controversial article in its mini constitution, the Basic Law, after rolling protests drew hundreds of thousands of people.

Anger over police tactics in the latest protests that have injured demonstrators has been a major focus of recent rallies. Hong Kong’s police watchdog has neither the authority nor the resources to effectively investigate the ongoing protests in the city, according to the Independent Expert Panel brought in to advise it.

The panel saw “a shortfall” in the powers of the Independent Police Complaints Council, according to a statement posted on the Twitter account of panel member Clifford Stott, a dean for research at Keele University in England. In July, Chief Executive Carrie Lam tasked the IPCC with conducting a fact-finding study into the unrest after growing public concern about police behavior and tactics.

The five experts of the panel were announced in September by the IPCC to advise the council as the rift between the government and protesters widened, with activists including the establishment of an independent inquiry into police conduct as one of their five demands.

“There’s a requirement for the IPCC to have increased capacity if it’s going to address the scale of events in question,” Stott said by phone. “We’re calling for that as a matter of urgency.”

The demonstrations were initially sparked by a proposed law to allow extraditions to jurisdictions including China. While the bill was withdrawn, the protests have developed into anti-Beijing expressions and demands have broadened to include democratic elections for lawmakers and the chief executive, with the extended period of unrest taking its toll on the city’s economy.

The comments from China’s top official overseeing Hong Kong affairs “is part of Beijing’s plan to tighten control over Hong Kong and exert further pressure on the pro-democracy camp,” said Joseph Cheng, a professor at the City University of Hong Kong and a pro-democracy activist. “The present situation in Hong Kong has turned into a crisis and that’s giving Chinese leaders a reason to press for a hard line.”

The city is due to hold elections next September for members of its lawmaking body, the Legislative Council, which are expected to be fiercely contested, given the ongoing unrest.

--With assistance from Iain Marlow.

To contact the editors responsible for this story: Brendan Scott at bscott66@bloomberg.net, Daniel Ten Kate