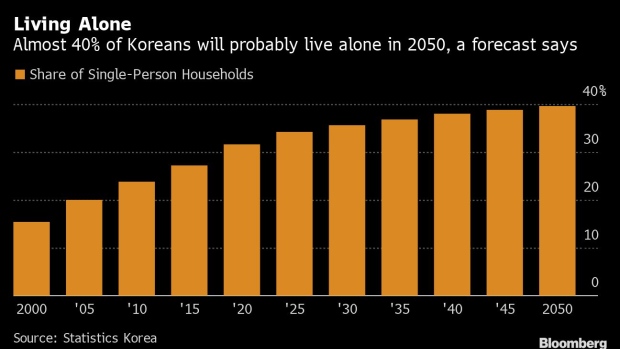 A pedestrian walks through an empty street in the Itaewon district of Seoul, South Korea, on Friday, Aug. 21, 2020. South Korea's fight against the virus is at a critical juncture as an infection flareup threatens to spread nationwide, said the country's Vice Health Minister Kim Gang-lip. , Bloomberg

(Bloomberg) -- The proportion of South Koreans expected to be living alone in 2050 is expected to more than double from the start of the millennium, the national statistics office said Wednesday, a change in the composition of households that is feeding into the world’s lowest fertility rate.

People living by themselves comprised about 7.2 million, or a third of households, in 2021, more than than any multiple-number family group. The ratio, which stood at 15.5% in 2000, will probably swell to almost 40% by the middle of the century, Statistics Korea said in a statement.

The figures show how the makeup of families is evolving as Koreans cope with both social norms and economic conditions in a country that has rapidly developed and matured over the years.

Korea now has roughly the same share of single-person households as the UK, though it’s still far below the level of Japan or Germany, according to Statistics Korea.

A lack of money and job security made up almost half of the reasons singles gave for not being married, the office added. Another 12% of respondents said they feel burdened by having to raise children. About 25% said they haven’t found the right partner or don’t feel a need to get married.

The rising number of single-person households will put further pressure on the country’s aging demographics. Economic difficulties, expensive education and gender inequality are among the reasons cited by exports for the declining number of babies born in Korea.