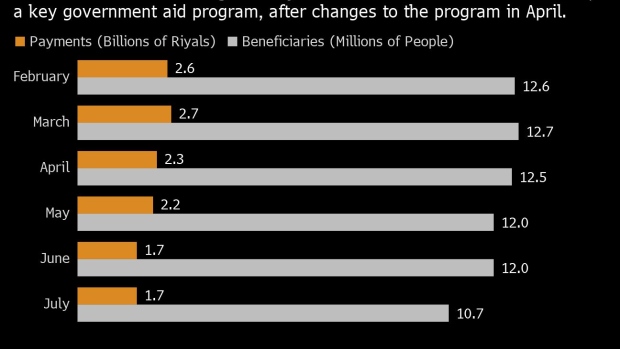 A security guard watches shoppers to ensure a socially distanced queue for access outside an Ikea AB store in Riyadh, Saudi Arabia, on Tuesday, May 19, 2020. Hit simultaneously by plunging crude prices and coronavirus shutdowns, the non-oil economy is expected to contract for the first time in over 30 years. Photographer: Tasneem Alsultan/Bloomberg , Bloomberg

(Bloomberg) -- Saudi Arabia has removed two million people from an assistance program meant to soften the blow of its economic overhaul, stirring frustration among some during the worst downturn in decades.

Officials began to scale back the so-called “Citizen’s Account” program in April, when they suspended new applications, set an upper limit for payouts and tweaked eligibility rules. The number of beneficiaries began to fall and the drop has accelerated. In July alone, 1.3 million people lost payments.

The government said the changes to the program would help direct support to those who need it most, and weren’t linked to the two-pronged crisis of oil-market turmoil and the Covid-19 pandemic roiling the kingdom. However their impact hit at the same time officials were rolling out new austerity measures, including tax increases.

“It feels like death,” said Bandar Awad, a 34-year-old courier told by text message he’s no longer entitled to the 300 to 400 riyals he’d received monthly. “Even recharging my cell-phone credit has become difficult.”

That hardship will test support for a critical tool unveiled by Crown Prince Mohammed bin Salman in 2016. And it will also likely hurt consumption as the economy shrinks and many Saudis face higher costs and lower income.

Designed to take the edge off a transformation plan that’s included subsidy cuts and a new value-added tax, the Citizen’s Account had provided monthly payments to more than 12 million people -- over half of all Saudis -- targeting low and middle-income households. It’s not the only form of state assistance in the world’s largest oil exporter, but it’s the most widely distributed, with an average handout of 930 riyals per family.

The International Monetary Fund expects the kingdom’s gross domestic product to contract 6.8% in 2020, the most in over 30 years. Facing lower oil revenue, officials have tripled VAT, increased import fees and canceled a cost-of-living allowance for government workers.

The slew of recent painful policy shifts left some wondering whether the government might reverse or offset some of them, as it has in the past.

“There is a chance, judging by history and given the economic challenges of Covid, that some of these measures might be relaxed at some time in the future,” said Mohamed Abu Basha, head of macroeconomic analysis at Cairo-based EFG-Hermes.

In a statement, the government entity administering Citizen’s Account said it began a review of the program in late 2019.

“There are some individuals registered as independent that don’t fulfill the standards to receive support because they live with their families,” the statement said. “Eligibility conditions didn’t change -- but some regulations were approved before the coronavirus crisis, with the goal of directing support to categories that are more deserving.”

Beneficiaries were asked to show a rental contract or property deed to prove they live independently -- disqualifying 1.3 million people in a culture where adults often stay with their families until marriage. The program said those found ineligible can register as dependents of their household head.

Other agencies increased aid during the pandemic, spending on health care and stimulus to keep businesses afloat.

Removed from the Citizen’s Account, Ashwag, a 30-year-old job seeker who lives with her family, now subsists on the 1,000 riyals she gets in state assistance each month as a divorcee. That’s “not enough these days with the VAT” increase, she said, asking for her last name to be withheld to speak openly about a politically sensitive topic. The program’s customer-service Twitter page is full of complaints about halted payments or questions about when applications will reopen.

For the 10.7 million Saudis still on the list, payments increased in July to an average 930 riyals per family, up from 725 riyals in June. Amounts fluctuate based on domestic energy prices.

“As an unemployed Saudi, honestly, every riyal makes a difference,” said Meshari, 41, and a father of four.