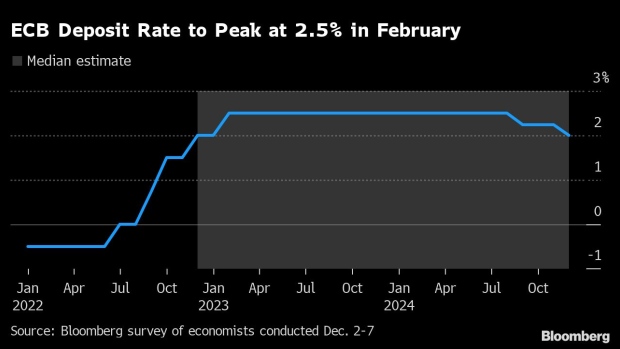 (Bloomberg) -- The European Central Bank will raise interest rates twice more in its struggle with unprecedented inflation, including a smaller half-point hike next week, economists predict.

Borrowing costs will be lifted by the same amount at February’s meeting, meaning the deposit rate will peak at 2.5%, according to analysts polled by Bloomberg. They also see the ECB starting to offload trillions of euros of crisis-era bond purchases sometime next quarter.

Despite the most forceful bout of monetary tightening in the euro’s history, more than half of respondents say the ECB remains behind the curve in tackling inflation that’s five times its 2% goal. The Federal Reserve, meanwhile, is also signaling a slowdown in rate hikes.

While price gains in the 19-nation euro zone moderated in November for the first since mid-2021, they’re set to stay elevated for some time yet as Russia’s war in Ukraine feeds the continent’s energy crisis.

“Inflation pressure will persist, while at the same time the ECB is expected to scale back the extent of rate hikes,” said Ulrike Kastens, an economist at DWS International GmbH. “The biggest challenge for the ECB is to convince the market that it really wants to fight high inflation in a credible way.”

Policymaking may become more fraught, however, as unwinding almost €5 trillion ($5.3 trillion) of debt holdings — a process known as quantitative tightening — enters the mix.

More than nine in 10 economists polled see QT happening by allowing bonds to mature, rather than actively selling them.

But its arrival increases the potential for conflict within the Governing Council, whose 25 members have so far dodged major animosity as they exit massive crisis-era stimulus. An extremely uncertain economic outlook and above-target price gains through at least 2024 present extra hurdles.

Consumers are signaling that policymakers haven’t done enough. Their expectations for inflation over the next 12 months rose to 5.4% in the ECB’s latest monthly poll and remained at 3% three years out.

Respondents in Bloomberg’s survey see euro-zone prices advancing 6.1% in 2023 and 2.2% in 2024. The economy is forecast to shrink during the winter before slowly resuming growth in the second quarter.

“The economic outlook for the euro area is deteriorating [...] The slowdown has coincided with even some of the Governing Council’s most hawkish members dialing down their calls for anything more than 50 basis points of tightening in December.”

While money markets see a terminal rate closer to 3%, they’re are also betting the ECB’s next move will be a half-point hike. That would be a win for the institution’s more dovish officials, with even some of their more aggressive colleagues suggesting they may back such an outcome.

“We wouldn’t be surprised to see an earlier start to QT in exchange for a lower rate rise — for example 50 basis points instead of 75,” said Luca Mezzomo, an economist at Intesa Sanpaolo.

Just four of 43 respondents anticipate a larger step. Among them is Nomura’s Andrzej Szczepaniak, who said underlying price pressures are “far too strong” to “celebrate peak inflation.”

While the Governing Council will next week unveil a broad QT plan, details on timing and volume are unlikely.

Of those economists anticipating the ECB will roll off maturing bonds, about two-thirds envisage an initial monthly cap of €10 billion-€30 billion, to ensure the process doesn’t roil markets. Most respondents expect the strategy to be revisited quarterly.

“Simultaneous QT and interest-rate increases is a dangerous policy mix in a fragile and indebted euro area, which isn’t out of the energy crisis yet,” said Nerijus Maciulis, chief economist at Swedbank. “In all likelihood, monetary tightening will prove to be excessive and will lead to the quick reversal.”