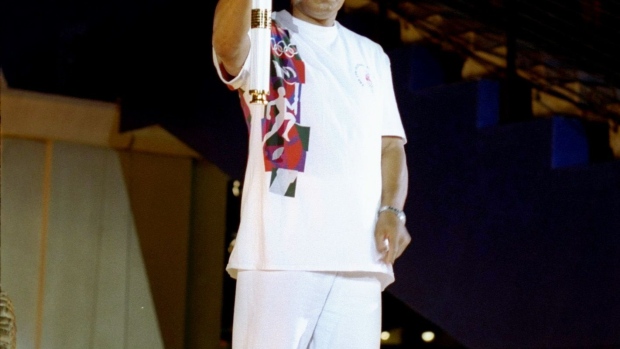 (Bloomberg) -- Muhammad Ali is already one of the 20th century’s most excavated, dissected, and meditated-upon figures in print and film.

This month brings two more documentaries about the champion boxer. The eight-hour Muhammad Ali, from Ken Burns, who co-directed with his daughter Sarah and her husband David McMahon, is slated to begin airing on Sept. 19 on PBS. On Sept. 9, Netflix premiered Blood Brothers: Malcolm X and Muhammad Ali, directed by Marcus A. Clarke and co-produced by Black-ish creator Kenya Barris.

The most obvious question looming over these new entries is: What’s left to say? Haven’t the bones been picked dry yet?

There are dozens of illuminating books on the man. These include the comprehensive Muhammad Ali: His Life and Times (1992); David Remnick’s King of the World (1999), which focuses on the years between Ali’s Olympic gold medal win and his second fight with Sonny Liston; and Norman Mailer’s The Fight (1975), which is primarily occupied with the events surrounding the “Rumble in the Jungle” fight with George Foreman.

Many celebrated documentaries have been made over the past 25 years, too: HBO’s Ali and Cavett: The Tale of the Tape (2018); The Trials of Muhammad Ali (2013) from PBS’ Independent Lens series; Facing Ali (2009), told through the words of the fighters who faced him; and the Academy Award-winning When We Were Kings (1996). A feature film released earlier this year, entitled One Night in Miami … and directed by Regina King, dramatizes the night Ali defeated Sonny Liston to become the heavyweight champ, which he spent with Malcolm X, singer Sam Cooke, and football star Jim Brown.

Anyone who grew up with—and followed—Ali’s exploits might well argue that neither of these two documentaries fulfills much of a need. But for those who came of age after Ali’s retirement in 1980, like me, going back and revisiting Ali’s life and struggles offers eerie similarities to issues confronting today’s divided American society.

Burns’s PBS series offers the most definitive cradle-to-grave portrait. It’s an invaluable resource that retraces the steps of one of the 20th century’s most fascinating characters and addresses how he intersected with so many issues over the course of his life—not just the role of athletics in society, but also race, faith, politics, and war.

It’s all there in chronological order. A bike thief in Louisville, Ky., sends the 12-year-old Cassius Clay to a boxing gym for the first time. A year later, Emmett Till’s murder in 1955 galvanizes Ali’s racial awareness. Ali wins the Olympic gold medal at the 1960 games in Rome and spends the next two decades of his life boxing professionally, winning the heavyweight championship an unprecedented three times. His rise coincides with television, allowing more people than ever to watch simultaneously.

Burns’s documentary series shines most when it seeks to reveal the tensions between Ali as man and myth. While Ali currently occupies a social role resembling sainthood, the PBS series reminds us Ali once bragged on television about meeting with the Ku Klux Klan because they, like him, believed in segregation. He openly admired George Wallace, the governor of Alabama who became the face of Southern resistance to the civil rights movement. Ali said: “People don’t want you to move into their neighborhood, why should you do that?” Over the years his strident positions softened, but it’s important to remember where his views began.

Clarke’s Blood Brothers: Malcolm X and Muhammad Ali, on the other hand, devotes its attention to perhaps the most complicated chapter and relationship of Ali’s life: his three-year friendship with Malcolm X, who would become one of Ali’s closest friends and mentors. After Malcolm X publicly exposed the Nation of Islam’s leader, Elijah Muhammad, as having fathered eight children out of wedlock via six teenage girls, Ali openly supported the retribution that led to Malcolm X’s assassination. In later life, Ali would call that abandonment one of his greatest regrets.

The Burns documentary offers a condensed version of the relationship between Ali and Malcolm X, from the profound connection that began in 1962 to its corrosive dissolution. It also highlights the contradictions in how we remember our heroes. While Ali is roundly celebrated for his moral and religious opposition to the Vietnam War, which he saw as contrary to the tenets of his Muslim faith, he also was an incorrigible adulterer who, according to Jonathan Eig’s 2017 biography Ali: A Life, also beat one of his wives.

Like John Lennon, who in 1970 confessed to Rolling Stone that he had a habit of hitting women, Ali is a now-beloved figure that our culture struggles to hold accountable for the same sins that would destroy the reputations of lesser figures. “We have a kind of conventional wisdom about people,” says Burns. “The story is more interesting and more complicated. But it doesn’t in any way diminish the final feelings. It actually makes them more accessible because they’re familiar to us. This is Greek mythology in a way.”

While Ali and Malcolm X’s public lives supply ample evidence to support West’s observation, their private lives—specifically, their subservience to the Nation of Islam—suggest prison-like constraints. Shortly after Elijah Muhammad died in 1975, Ali confessed to a reporter that he hadn’t left the organization earlier because he was terrified he’d meet the same fate as Malcolm X.

Two moments in Blood Brothers stand out. One shows how the Nation of Islam and Elijah Muhammad, which had opposed boxing, changed their tune after Clay won the championship; they recognized the opportunities the champ and his remarkable profile could bring. For me, the film illuminated a strange symmetry and overlap between Ali’s role with the Nation of Islam and Tom Cruise’s with Scientology. Their celebrity enabled recruitment and won them mascot status.

An additional item caught my ear. Blood Brothers contains an anecdote about how Cassius Clay, at 18, threw his Olympic gold medal into the Ohio river after being denied service in a Louisville diner. The story was debunked by Ali himself when he reluctantly confessed to biographer Thomas Hauser that he actually wasn’t sure how he parted with the medal—whether it was stolen or lost while he was relocating.

Here the film honors John Ford’s maxim, “When the legend becomes fact, print the legend.” It remains in the film despite the fact that its source material—a book also called Blood Brothers, by Johnny Smith and Randy Roberts—explicitly points out the incident was apocryphal. Why does the filmmaker then suggest the myth be taken as fact?

The choice encapsulates how malleable a figure like Ali’s can be. Mark Kram, who wrote Ghosts of Manila about the “Thrilla in Manila” from Joe Frazier’s point of view, once likened Ali to Chauncey Gardiner, the Peter Sellers character in Being There: Ali was someone who was ever available for people to make projections to suit their own ends. If so, there remains an essential value to examining Ali on screen and in books—and calling out myths—at a time when truth and facts feel especially up for grabs.