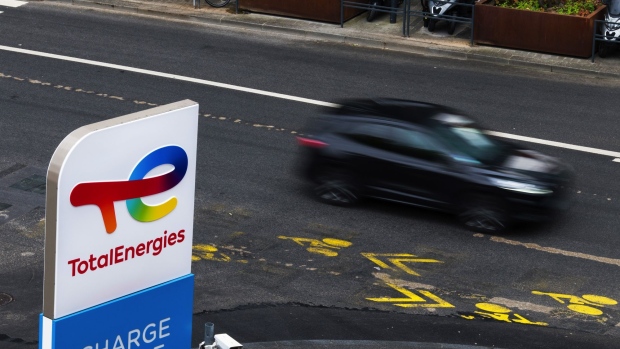 Two of Big Oil’s biggest players dropped their long-term energy outlooks this week: French energy company TotalEnergies and the Organization of the Petroleum Exporting Countries. They offer quite different visions of the world 25 years from now. The European energy major sees a future driven by technology and policy; the cartel presents a vision that looks much like today.

TotalEnergies looks at all energy demand, not just oil, and posits a now-familiar refrain of Europe’s long-term corporate energy planners: renewable energy will continue to expand rapidly; oil and coal demand growth will fall; and natural gas demand, continuing to rise, will be the key to the energy transition. Even with a timeline measured in decades, details matter. Let's take a closer look at two scenarios Total puts forth of the energy transition: Momentum and the somewhat alarmingly, named Rupture.

Momentum, the outlook notes, is “based on decarbonization strategies of net-zero 2050, with China on track to achieve carbon neutrality by 2060” and includes the announced climate targets and Paris Agreement-based nationally determined contributions of other countries. This scenario, a baseline expectation, foresees a temperature rise of 2.2 to 2.4 degrees Celsius by the end of the century. Rupture is more aggressive: it expects countries to meet the global aspirations of the Paris Agreement along with even more net zero commitments, strong public policy, technology advancements, and a new energy system built on a global scale.

Momentum also creates ceilings on future demand for oil and coal (gas, on the other hand, continues to grow). Peak oil demand will come at some point in this decade. In the Rupture scenario, oil demand in 2050 is 60 per cent lower than in 2019. Coal demand has already peaked and gas demand continues to grow. 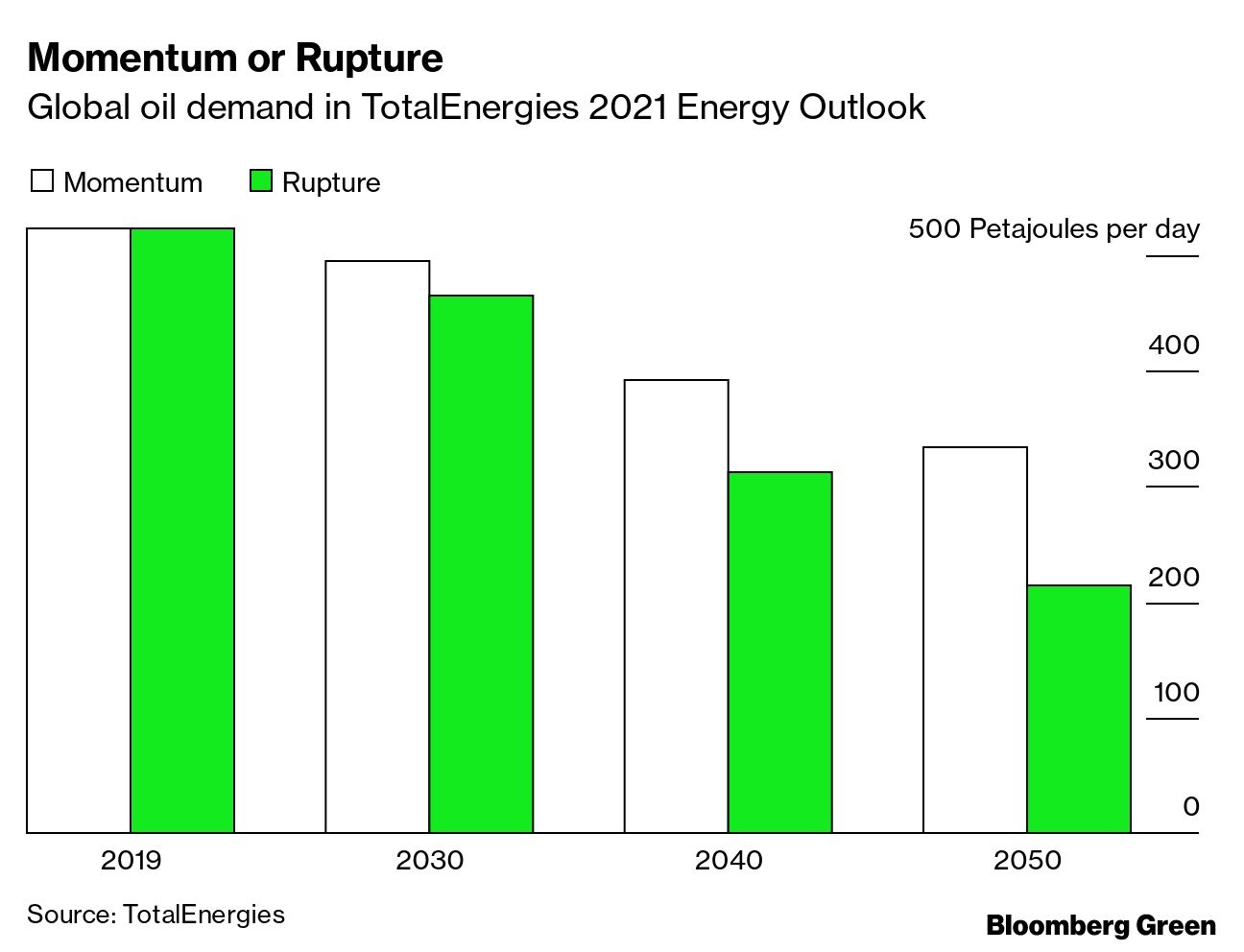 OPEC, not surprisingly, has a rather different take on oil. It sets out four scenarios, only one of which has a technology lens. The oil cartel sees demand rising in one scenario, plateauing in another, and peaking in the 2030s in another. The only decline from 2019 levels is in its most aggressive scenario, the Accelerated Policy and Technology Case. 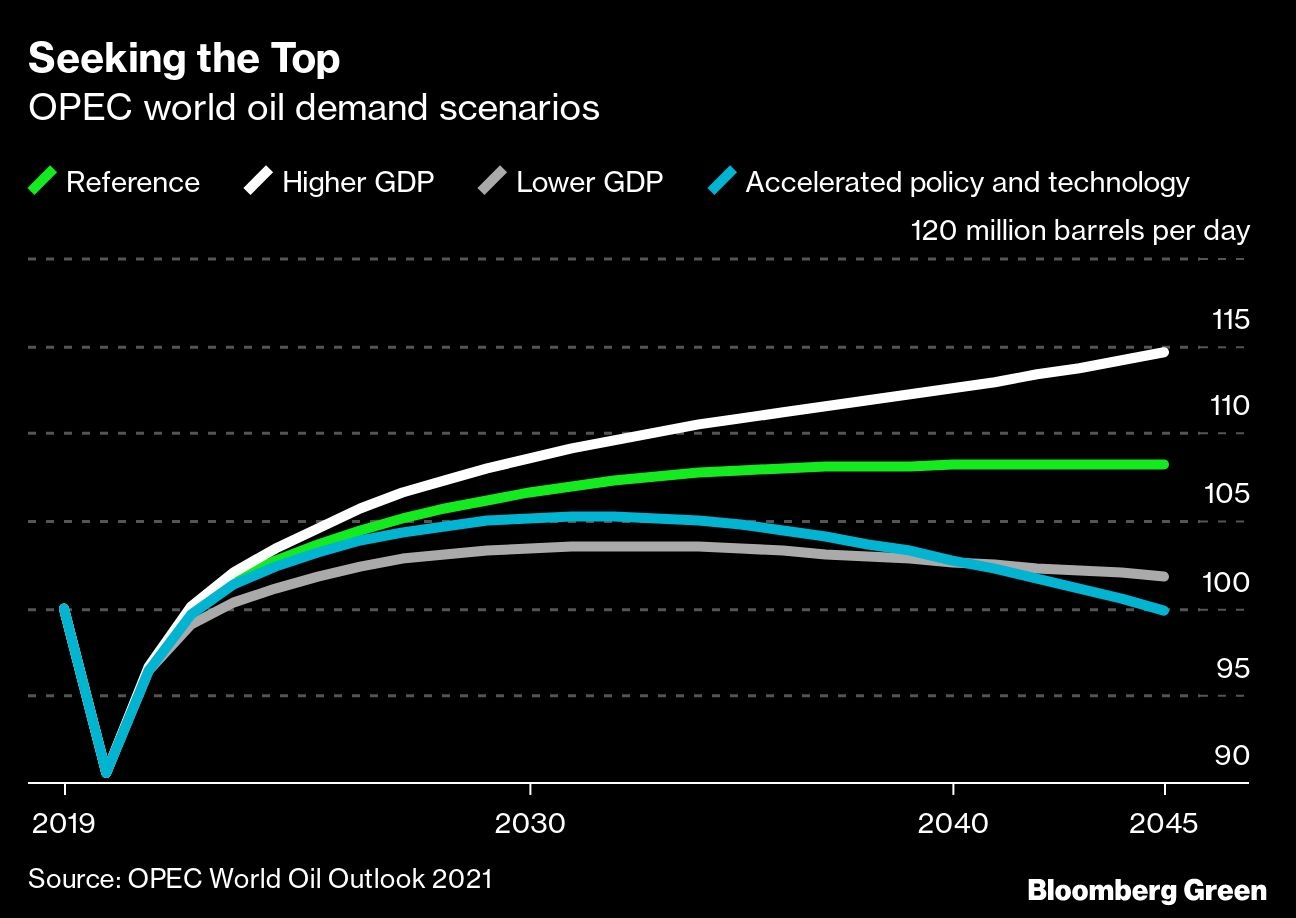 OPEC’s energy transition-focused scenario allows for more aggressive policies, but does not spell them out. Technology breakthroughs play no part in its vision, but it allows for the possibility of faster adoption of existing technology.

New research from the Institute for New Economic Thinking at the Oxford Martin School suggests that OPEC’s technology scenario significantly underestimates what is possible to change transport. The researchers have scrutinized the actual and projected costs for 50 different energy technologies, and found that most models consistently over-estimated costs and under-estimated deployment for renewable technologies. Solar, wind, and batteries on the other hand, have dropped in cost at a rate of roughly 10 per cent per year for several decades. Today’s energy technology simply needs to continue at that rate to change tomorrow’s energy system.

That is a scenario the Oxford researchers see as possible. Their “Fast Transition” scenario assumes that “renewable energy and storage technologies maintain their current deployment rates for a decade, replacing fossil fuels in two decades.” Its “Slow Transition” scenario requires current renewable growth rates to slow immediately, with fossil fuels still dominating through the middle of the century.  In a “No Transition” scenario, every energy type grows proportionally to its share today. This, the authors say, is essentially a worst case scenario.

“No Transition” sounds much like what OPEC expects: today, just more of it. But that is not what research suggests is possible based on decades of observation. And it’s not what companies like TotalEnergies expect either, when even their standard scenario sees demand for oil peaking soon, then declining substantially by mid-century.