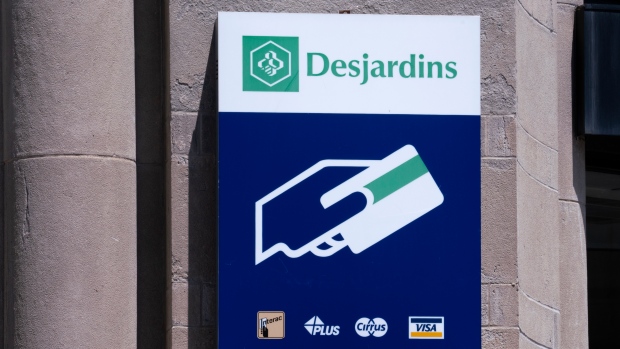 A Caisse populaire Desjardins sign is seen in Montreal on Tuesday, June 18, 2019. , THE CANADIAN PRESS/Paul Chiasson

MONTREAL -- Desjardins Group has shown two senior executives the door in the wake of a data breach that affected all 4.2 million of its members.

"Desjardins has come to a mutual agreement with both Mr. Berthiaume and Mr. Habib to end their respective working relationships, and Desjardins Group will move forward with new leadership," the financial co-operative said in a release Tuesday.

Chief executive Guy Cormier announced the changes in a conference call with employees earlier in the day.

"Trust between a president and their management committee is essential. In light of the events of the last few months, I've decided changes must be made to our senior management team," Cormier said in a statement.

The breach, which scooped up data including social insurance numbers, names and addresses, came to light in June.

A pair of privacy watchdogs launched an investigation in July to examine whether Desjardins, which operates mostly in Quebec, was in compliance with federal and provincial laws around personal information protection.

Chief financial officer Real Bellemare will replace the chief operating officer, Desjardins said. Bellemare will also take on the role of interim IT chief until the position can be filled.

Bellemare will be tasked with forming a new security office, which will work to co-ordinate security strategies and protect members' personal information.

Alain Leprohon, a long-time manager with Desjardins, has taken over Bellemare's role as chief financial officer.

The HR shuffle comes after Cormier has indicated his intention to seek a second four-year term at the helm of Desjardins. The nomination period ends on Dec. 13.

Karl Moore, an associate professor at McGill University's business school, noted that "it's highly unusual to fire people of that level."

"It's sending a powerful message that it's not going to happen again and we're going to fire those responsible," Moore said. "It's signalling how important this issue is."

Berthiaume, who Cormier named chief operating officer in 2016, spent more than 18 years at Desjardins. Habib came on board in 2011, ascending to head of IT three years ago.

Cormier said in June the breach was the result of a lone employee who "acted illegally, betraying the confidence of Desjardins."