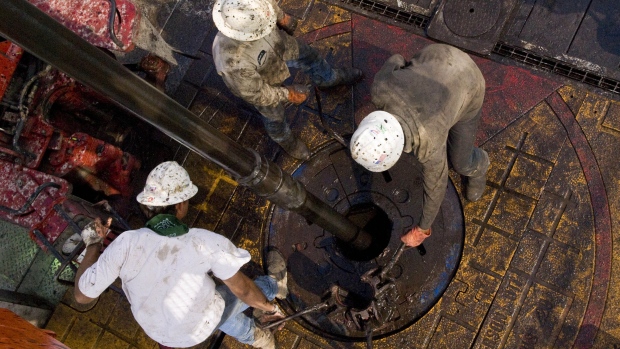 Patterson UTI Drilling Co. floorhands move a drill pipe collar as pipe is removed from a natural gas well being drilled in the Eagle Ford shale in Karnes County, Texas, U.S., on Tuesday, June 22, 2010. Reliance Industries Ltd. agreed to pay $1.3 billion to Pioneer Natural Resources Co. and its partner for its second purchase of shale gas assets in the U.S. in three months. The company will pay $263 million up front and fund $1.1 billion of Pioneer and Newpek LLC's drilling costs in a joint venture in the Eagle Ford formation in south Texas, Reliance said in a statement. Photographer: Bloomberg/Bloomberg , Bloomberg via Getty Images

Jointly signed by the chief executives of both companies, the letter seeks a virtual meeting among the three-member Texas Railroad Commission no later than April 13, according a five-page draft of the letter shared with Bloomberg News. Ryan Sitton, one of the commissioners, said earlier on Monday that the regulating body would discuss curbing oil output at its next meeting.

The request from Pioneer and Parsley, both drillers in the Permian shale basin of West Texas and New Mexico, comes even as oil and gas industry groups push back against potential output cuts. The American Petroleum Institute has blasted Sitton’s plan to curtail production as a “shortsighted” and “anti-competitive” effort that will “harm U.S. consumers and American businesses.”

But Gallagher said Texas output should be cut by 20%.

“Taking this action from a state level I think will help enable discussions at an international level from our federal government,” he said.