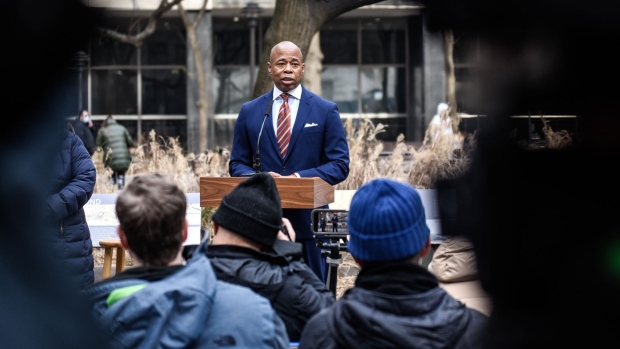 Overall, 63% of city residents have a positive impression of the former police captain, compared to a fifth who have a negative opinion, in the first statewide poll measuring the new mayor’s popularity.

The poll was taken between Jan. 9-13, less than two weeks into Adams’s tenure. In that short period, he’s confronted a string of challenges, including the Covid-19 omicron surge, a rocky return back to school, and the city’s deadliest fire in three decades, which killed 17 people in the Bronx. He’s also embarked on a whirlwind tour of the city and urged New Yorkers to embrace their “swagger,” a catchphrase parodied over the weekend on “Saturday Night Live.”

Statewide, Adams’ favorability is lower, at 41-19, with some 40% of New Yorkers saying they don’t know enough about the new mayor to have an opinion. Adams is most popular among Black residents, who approve of him 62-19, compared to 47-27 among Latinos and 34-18 among White New Yorkers.

The Siena poll also showed Governor Kathy Hochul increasing her name recognition among the state electorate as she prepares for a competitive Democratic primary in June and a November general election.

The poll found that 46% of voters would elect Hochul over her likely opponents in the Democratic primary if the contest were held tomorrow. Just 6% would select Representative Tom Suozzi, the Long Island Congressman planning to run against her. Roughly 11% would choose New York City Public Advocate Jumaane Williams and 12% would vote for former New York City Mayor Bill de Blasio.

“Five months is a long time in politics but given her bully pulpit, campaign war chest and enormous early lead, Williams, Suozzi and de Blasio, if he enters the race, have a lot of catching up to do and a very steep path in front of them,” said Siena College pollster Steven Greenberg.

Only 25% of voters said they knew too little about the governor to have an opinion of her in the January poll, compared with 69% in April of 2021. The poll sampled 806 registered voters in New York state and has a margin of error of plus or minus 4 percentage points.