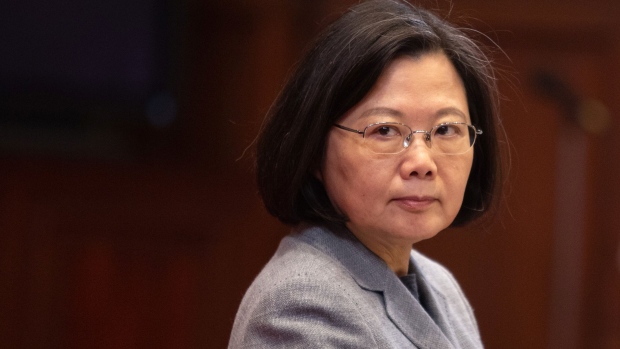 (Bloomberg) -- Saying that China and Taiwan are “not subordinate” to each other might seem obvious, since they’ve been locked in an unresolved civil war for decades. But Taiwan’s use of those words earlier this month continues to reverberate, risking a fresh rupture in U.S.-China ties.

President Tsai Ing-wen said the Republic of China and the People’s Republic of China, as Taiwan and the mainland are officially called, are “not subordinate to each other” in a televised speech marking the island’s National Day on Oct. 10. Tsai’s camp argues she was reiterating the status quo, reflecting the fact that the Communist Party has never ruled Taipei.

To Beijing, however, that phrasing came close to reviving an idea that fueled tensions between China and the U.S. two decades ago. A spokesman for the Taiwan Affairs Office in Beijing accused Tsai of “peddling the two-state theory,” a reference to former Taiwanese President Lee Teng-hui’s policy that Taiwan and China should have state-to-state relations -- something state media called “a daydream.”

The episode illustrates the fragile truce across the Taiwan Strait, as China ramps up a military and diplomatic pressure campaign and President Joe Biden affirms the U.S. commitment to defend the democratically ruled island from attack. Although Tsai hails from a party founded on the promise of formal independence, she has largely steered clear of defining Taiwan’s status in a way that could push President Xi Jinping toward military action.

Deng Yuwen, a former editor at the party-run journal Study Times, argued in a commentary last week that Xi had been unusually quiet in not challenging Tsai’s perceived revival of the two-state theory. While Deng speculated that Xi’s diplomats were likely pushing the U.S. to take a side, he said the Chinese president could face internal pressure if he was publicly seen as ignoring the issue.

During the decades that Taipei was ruled by the Nationalist Party, or Kuomintang, it shared agreement with Beijing on one key point: that both sides were part of “China.” But after Taiwan transitioned from martial law under the KMT to democracy in the 1980s and 1990s, leaders like Lee -- Taiwan’s first elected president -- began to break from the “one China” framework.

In 1999, Lee proposed that the two sides had a “special state-to-state relationship.” That same year, Tsai’s Democratic Progressive Party, which was then in the opposition, made a subtle tweak to its long-held goal for independence. The party resolved that Taiwan was already a sovereign nation: it was “not a part of the People’s Republic of China” and the one-China principle idea was “fundamentally inappropriate for Taiwan.”

Tsai explained the idea in an interview with the BBC after winning her second four-year term in 2020. “The idea is that we don’t have a need to declare ourselves an independent state,” she said, because “we are an independent country already.”

Taiwan’s decision not to force the issue has allowed the U.S., Japan and others to maintain “strategic ambiguity,” keeping the island -- and its key industries such as chipmaking -- out of Communist Party control. Although the U.S. recognized the People’s Republic as the “sole legal government of China” more than four decades ago, it never clarified its position on Taiwan’s sovereignty or whether it would use force to defend Taiwan.

“Tsai’s careful rhetoric sidesteps questions of sovereignty or a ‘two-state theory’ by focusing on the tangible and the undeniable, which is neither the ROC or PRC are subordinate to each other,” said Vincent Chao, former political director at the Taipei Economic and Cultural Representative Office in the U.S., Taiwan’s de facto embassy. “The main point is that both sides should at least acknowledge each other’s existence as a step towards finding a way to get along.”

But as Taiwan has gained global recognition for its handling of the Covid-19 pandemic, and Tsai positions her island as a test of democracy’s strength in the face of authoritarianism, Washington has faced increased pressure to commit. Biden said Friday the U.S. would defend the island from a Chinese attack -- although the White House quickly said he wasn’t announcing a change in policy.

Chinese Foreign Ministry spokesman Wang Wenbin urged the U.S. to “speak prudently” and stick to the “one-China” agreement, at a regular news briefing Friday in Beijing, reiterating that “Taiwan is an inalienable part of China’s territory.”

Deng, the former Study Times editor, pointed out in his commentary that Xi’s predecessor, Jiang Zemin, successfully pushed back on Lee’s theory in 1999, including by persuading then-U.S. President Bill Clinton to voice opposition. He said that Chinese diplomats were now likely back-channeling Washington to similarly condemn Tsai’s Oct. 10 speech.

If China and the U.S. can’t reach a consensus, Deng wrote, that “would mean the Biden administration had acquiesced the two-state theory.”