Stock selloff not likely not done yet: Market strategist

The worst stretch of stock market volatility in a year left a relatively light mark on benchmark indexes, all things considered. But for risk appetites, the impact was deeper.

Trader nerves were repeatedly raked, first by coronavirus angst then with a new tone of hostility from Federal Reserve Chair Jerome Powell. It added up to one of the bigger challenges yet to the unhinged buoyancy that has defined virtually the entire pandemic era in markets. Hedge funds weren’t waiting around to see how things turned out. They bailed at the fastest rate in 20 months.

Could it be another false alarm in a market that has tortured bears for two years? Yes -- big bounces on Monday and Thursday showed dip buyers remain unabashed, and nothing in the economy or monetary policy offers unambiguous reason for panic. But particularly in light of the rising resolve to fight inflation among central bankers, many sensed a change in the air after a year of virtually uninterrupted gains. 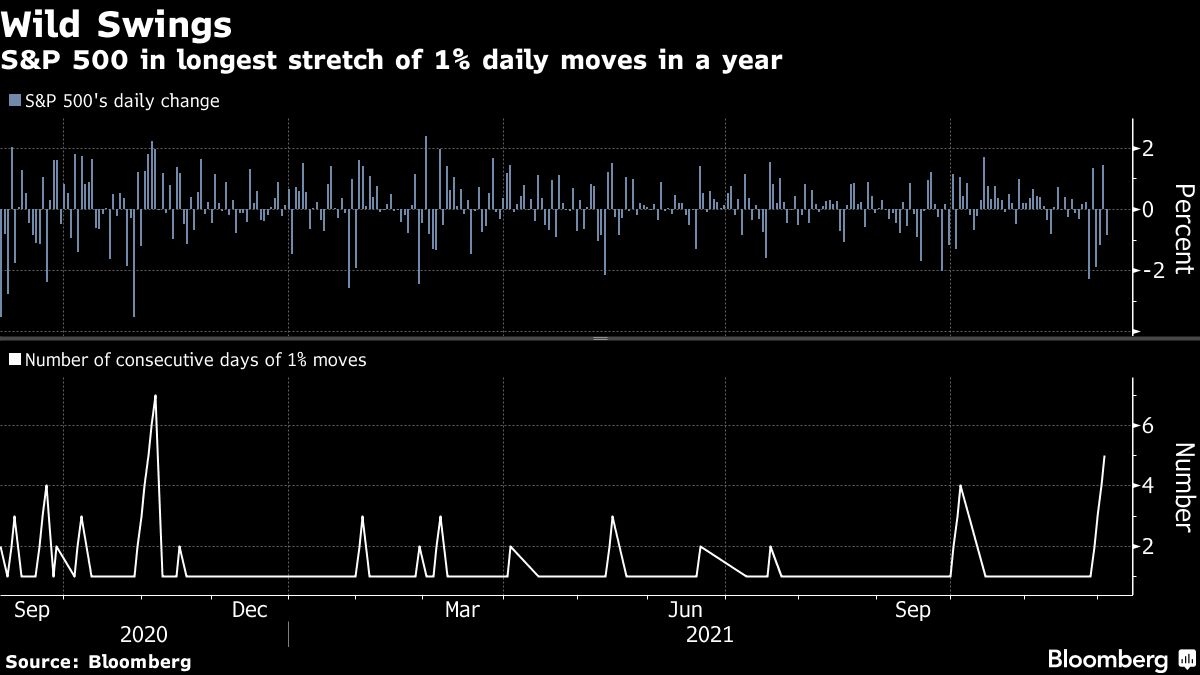 “The selloff has been a little bit deeper than I thought it would have,” Peter Cecchini, director of research at Axonic Capital LLC, said by phone. “Sentiment has shifted. We’ve moved from what has for 12 years been a buy-the dip-market into a sell-the-rally kind of market, because the support from the Fed, given inflation, is not going to be there.”

If it does turn out to be a moment of reckoning for markets, it comes at an inopportune time for those who have poured about US$1 trillion into equity funds in 2021 in anticipation of another year-end rally. Big finishes have been a safe bet in the past: the market has rallied in all but three Decembers since the global financial crisis.

Before a late-session rally Friday broke the streak, the S&P 500 had notched up or down moves of at least 1 per cent on five straight days through Friday, a run of turbulence that hasn’t happened since November of last year. Friday’s session was a microcosm of the turmoil, with the index adding as much as 0.7 per cent before falling 1.8 per cent at its lowest only to end down 0.8 per cent. Over the week, the Cboe Volatility Index has averaged more than 28, the highest showing since January.

While the S&P 500 lost 1.2 per cent over the week, the pain was acute in the speculative space -- companies that just went public, or trade at nosebleed valuations -- or both. They had all been thriving under Fed largesse. Now facing a relatively hawkish Powell for the first time in three years, these once-coveted stocks are suddenly out of favor with their valuations getting harder to justify. 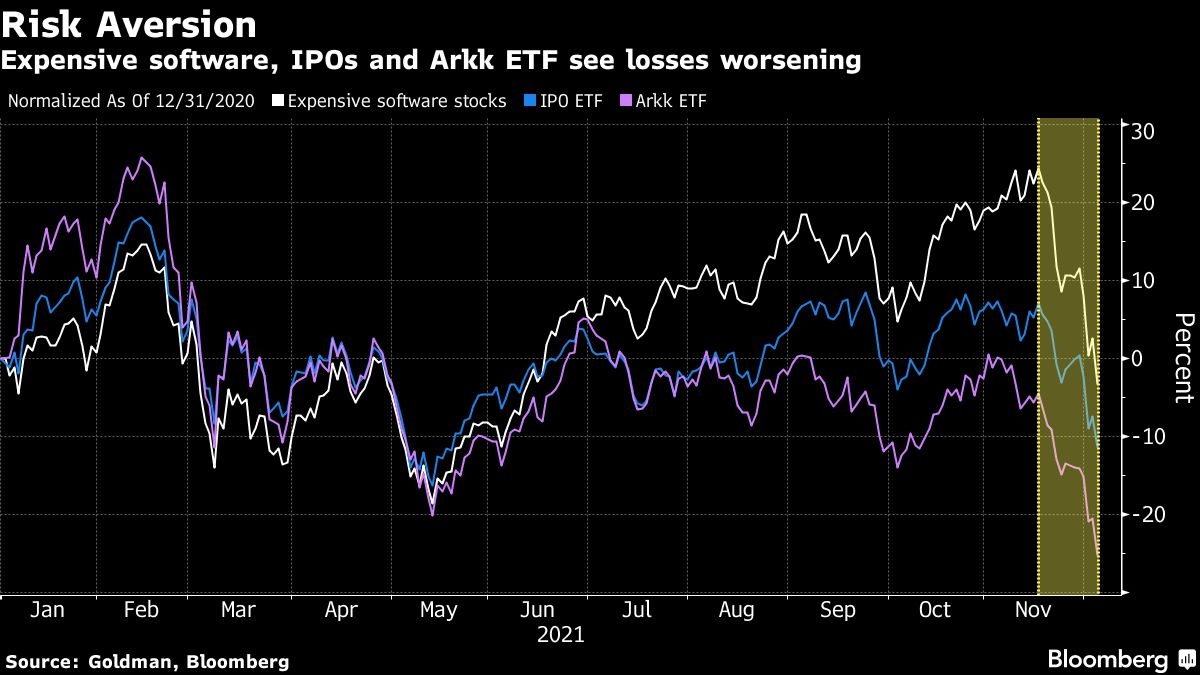 The Renaissance IPO ETF (ticker IPO), tracking recent initial offerings such as Coinbase Global Inc. and DoorDash Inc., tumbled 11 per cent over five days, the most since March 2020. A Goldman Sachs Group Inc. basket of extremely expensive software stocks such as Asana Inc. also suffered its worst week since the dark days of the pandemic bear market, plunging 12 per cent.

The carnage was a blow to those who had piled into these risky bets. Growth-stock maven Cathie Wood saw her flagship ARK Innovation ETF (ARKK) shed 13 per cent in the five days.

Hedge funds, which according to Goldman Sachs counted expensive tech stocks as a third of their holdings at the start of the fourth quarter, are quickly unwinding their positions. On Wednesday, they dumped stocks at the fastest pace since September, data compiled by Goldman’s prime broker show. Their net leverage, a measure of industry risk appetite that takes into account long versus short positions, fell the most since April 2020.

At Morgan Stanley, hedge-fund clients have cut their net leverage by roughly 6 per cent over the past month. That’s a departure from what the firm says is typically a risk-on positioning into the year-end.

“With the Fed meeting about two weeks away and the uncertainty around omicron, liquidity will likely be challenging. This doesn’t make for a great backdrop for equity risk,” said Mike Lewis, head of U.S. equity cash trading at Barclays Plc. “People just want to get through December. Nobody wants to ruin their year in the remaining few days down the homestretch.”

As rough as it got, bargain hunters remained mostly undaunted. Retail day traders, this bull market’s steadfast ally, are again buying the dip, snapping up shares at a clip that according to JPMorgan Chase & Co. was unprecedented. Dip buyers emerged late Friday, sending the S&P 500 up more than 30 points in the final 10 minutes of trading.

Peter van der Welle, a strategist within the fundamental multi-asset team at Robeco Institutional Asset Management, echoes the sentiment, pointing to a backdrop where earnings will grow by “low double digits” next year. The firm bought Russell 2000 futures recently in part because small-cap stocks are more attractively valued than large-caps.

“We have been waiting to pull the trigger on the trade for a couple of weeks. We were waiting for the buy the dip moment,” he said. “We are not over-worried about the impact of the omicron variant.” 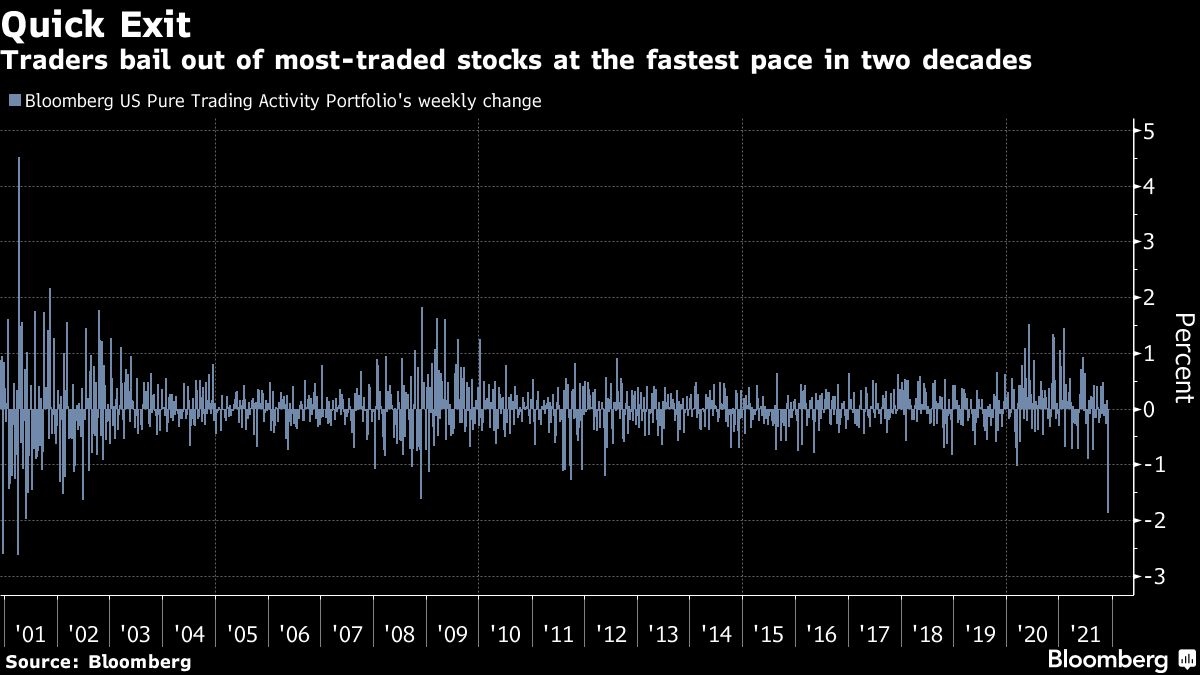 But a sense of trepidation is creeping in. Traders are turning to the options market for protection. The Cboe equity put/call ratio this week jumped to the highest since July.

Meanwhile, investors were exiting the highest-volume names at a clip not seen in two decades. The Bloomberg U.S. Pure Trading Activity Portfolio, which is long stocks with the highest turnover against those with the lowest turnover, had its worst week since 2001.

With the S&P 500 up 21 per cent in 2021, one might conclude it’s been an easy year to navigate. The truth is, the post-pandemic world is so hard to predict and a lot of professional forecasters have got the market wrong.

Friday’s jobs report added to a long list of confusing data that baffled investors. And the emergence of omicron is further clouding the economic outlook, which feeds into the unpredictability over monetary policy and market volatility, according to Olivia Engel, chief investment officer of active quantitative equity for State Street Global Advisors.

“It has been quite remarkable to see the magnitude of some of the reversals -- just looking at simple things like the value versus growth trade has been really swinging about the last week, risk-on versus risk-off has been huge,” she said. “The outlook on inflation is just complicated a bit more by omicron because you just don’t know how individuals are going to react to the threat.”