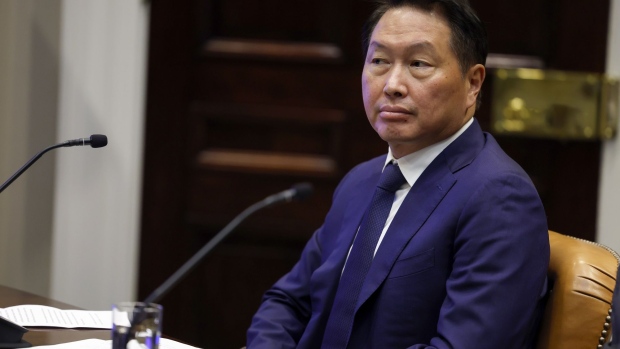 In a first court ruling, a judge awarded Roh 66.5 billion won ($50 million) and 100 million won in alimony. The court rejected her claim for a stake in SK Inc., the holding company that controls the group’s business interests spanning memory chips to telecommunications.

Chey, 62, will keep 17.5% of SK. He was worth $2.6 billion as of Monday’s close, according to the Bloomberg Billionaires Index.

Chey met Roh, the daughter of former President Roh Tae-woo, while studying at the University of Chicago. They married in 1988 and had a son and two daughters together.

In 2015, Chey revealed he had a child with another woman, and two years later, he sought a divorce settlement mediated by a court. As the couple failed to reach an agreement, the case went back to court, and in 2019 Roh filed a lawsuit demanding 42.3% of Chey’s stake in SK. She also asked for 300 million won in alimony.

Chey has led SK Group since the 1998 death of his father, Chey Jong-hyon, the brother of the late founder. Under him, SK Group overtook Hyundai Motor Group to become the country’s second-largest conglomerate with 292 trillion won in assets this year, just behind Samsung Group, according to data compiled by the Korea Fair Trade Commission. Chey also ventured into new areas and in 2012 acquired Hynix Semiconductor, the memory-chip maker that’s now SK Hynix Inc., a giant with $45 billion in market value.

SmileGate Holdings’ Kwon Hyuk-bin, whose wealth is estimated at $5.4 billion, is also facing an expensive breakup. His wife requested a court last month to ban Kwon from selling his shares in the gaming company until a divorce is finalized.

While Chey’s split won’t reshape the wealth rankings, some recent high-profile breakups have. MacKenzie Scott, with a $21 billion fortune, became one of the world’s wealthiest women -- and one of the most prolific philanthropists -- after divorcing Amazon.com Inc.’s Jeff Bezos in 2019. Melinda French Gates is now worth $11.2 billion after breaking up with Bill Gates last year.

--With assistance from Jack Witzig.