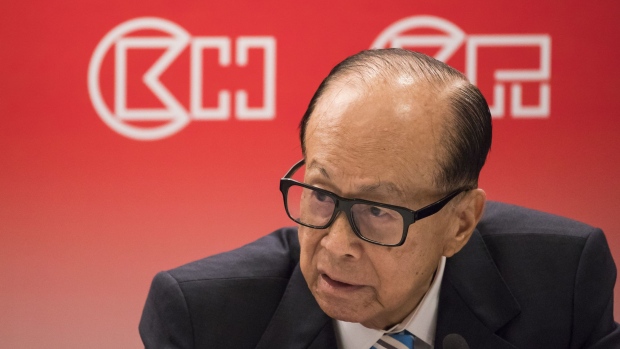 Billionaire Li Ka-shing, chairman of CK Hutchison Holdings Ltd. and Cheung Kong Property Holdings Ltd., speaks during a news conference in Hong Kong, China, on Wednesday, March 22, 2017. Li appeared to hold back tears while speaking about Hong Kong's economy, underscoring the tycoon's continued pessimism about conditions in a market that he’s described as being in its worst state in two decades. , Bloomberg

(Bloomberg) -- Hong Kong magnate Li Ka-shing lost $1.5 billion in a day, with the value of his sprawling business empire tumbling along with the historic decline in the pound.

CK Hutchison Holdings Ltd., the flagship conglomerate of Li’s group that earned 16% of its revenue from the UK in the first half, saw its shares slump 5.8% on Monday to the lowest since it restructured in 2015. Sister company CK Asset Holdings Ltd., a real estate developer that earned almost a third of its revenue from the UK, plunged 8.6%. Both recovered some ground on Tuesday, rising about 3%.

The share slump came amid a global rout as the pound fell to a record low and bets build the currency could slide even further. The $1.5 billion hit to Li’s personal fortune was the fifth-biggest decline among the world’s 500 richest people, according to the Bloomberg Billionaires Index. The 94-year-old is still worth about $26.7 billion, keeping him high in the ranks of Asia’s wealthiest people, with his stake in CK Asset accounting for most of his net worth.

Read more: Pound Under Siege With Mounting Bets It Will Drop Below $1

It’s one of the few Hong Kong groups with extensive overseas exposure, a strategy that has typically helped it weather risks ranging from protests in Hong Kong in 2019 to the ups and downs of the Covid pandemic.

But currency fluctuations have always been a challenge, with the company reporting results in Hong Kong dollars, which are pegged to the strengthening greenback.

That portends a big hit for the company. CK Hutchison has likely seen HK$15.7 billion ($2 billion), or 11.5%, of the net value of UK assets wiped out since June 30 due to the pound’s slump, according to Bloomberg News calculations.

A CK Hutchison representative declined to comment, while CK Asset didn’t immediately respond to a request for comment.