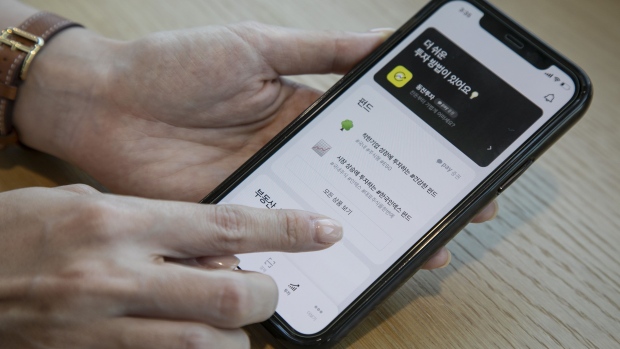 The Kakao Pay Corp. application on a smartphone arranged at the company's headquarters in Seongnam, South Korea, on Monday, May 24, 2021. Kakao Pay, South Korea’s largest online payment service with 36 million users, is seeking to raise as much as 1.63 trillion won ($1.4 billion) in an initial public offering in Seoul, following blockbuster IPO filings from Kakao Bank and Krafton Inc. this week. , Bloomberg

(Bloomberg) -- Brian Kim, the founder of South Korean messaging giant Kakao Corp., has seen his fortune jump by more than $6 billion this year, propelling him to the top of the country’s wealth ranking.

Kim is now worth $13.4 billion, according to the Bloomberg Billionaires Index, after Kakao shares rose 91% in 2021 alone. South Korea’s second-richest person, Samsung heir Jay Y. Lee, has a net worth of $12.1 billion.

It’s an example of how self-made technology entrepreneurs are climbing the rich list in South Korea, passing members of families that control the country’s decades-old conglomerates. It also shows the power of initial public offerings: Kakao’s stock has been rising as its subsidiaries sell -- or plan to sell -- shares.

“Expectations have built up ahead of the listings of Kakao’s key units,” said Hyunyong Kim, an analyst at Hyundai Motor Securities Co. in Seoul. “Kakao’s strategy has been to expand its business rapidly by aggressively attracting investment. IPOs are the smoothest and most surefire way.”

Kakao confirmed the value of Kim’s holding, excluding shares he pledged as collateral.

Online lender KakaoBank Corp., in which Kakao has a 32% stake, is set to go public next month. The company will raise 2.6 trillion won ($2.3 billion) after pricing at the top of a marketed range.

Kakao Pay Corp., the country’s largest online-payments service, was scheduled to debut on Aug. 12, but the listing was delayed after the Financial Supervisory Service, a regulator, asked it to revise its prospectus.

Kim set up Kakao’s predecessor, Iwilab, in 2006 and launched KakaoTalk four years later. The messenger service has about 53 million users globally, 88% of whom are in the domestic market, according to a company filing in May.

Kakao has expanded far beyond mobile messaging, with businesses in areas from payments and banking to gaming and ride-hailing. It’s now the fourth-biggest company listed in South Korea, with a market value of about $58 billion.

The pandemic helped spur demand for Kakao’s mobile-platform services as people reduced face-to-face interactions, according to Kim of Hyundai Motor Securities. Profit tripled to about $209 million in the first three months of 2021 compared with a year earlier.

More IPOs are expected to follow at Kakao as the ride-hailing, entertainment and Japan business units also plan to go public, according to a research report by Sung Jonghwa, an analyst at eBest Investment & Securities Co. in Seoul.

Kakao said Kakao Japan Corp. is working with Nomura Holdings Inc. for an IPO but the schedule hasn’t been decided. The company said that while people in the industry expect other units to go public, nothing has been determined.

Kim, 55, comes from a humble background, at one time sharing a room with seven family members. He was the first of his siblings to attend college, studying at the prestigious Seoul National University, where he offered private tutoring to help pay his tuition.

He has signed the Giving Pledge initiative started by Warren Buffett, Bill Gates and Melinda French Gates, promising to donate most of his fortune to help solve social issues.

“Having grown up in poverty, up until my 30s, I regarded ‘becoming rich’ the sole measure of a successful life,” Kim wrote in a statement in March when he took the pledge. “However, after having achieved the wealth that I had aimed for, I was left feeling rudderless and lacking direction.”