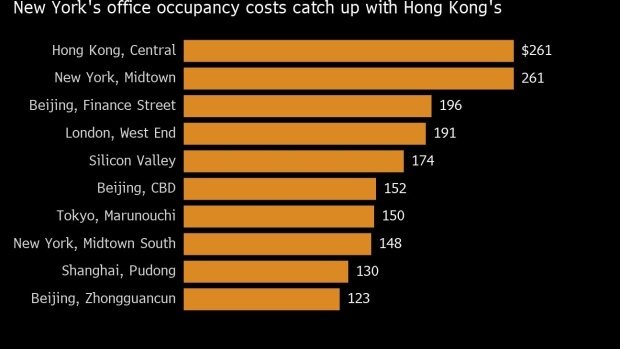 The Henderson under construction in Central, onJan. 24. , Bloomberg

(Bloomberg) -- The world’s most expensive office market has more empty floorspace than ever.

In Central, the city’s prized financial center, the supply is set to increase further. Li Ka-shing and Lee Shau Kee, Hong Kong’s richest property tycoons, are building new office blocks that are slated to open next year. It’s not clear how quickly vacancies will fill up as the border with the mainland remains shut, preventing Chinese companies from supporting Hong Kong’s office market, while demand from global banks wanes as the pandemic reshapes work styles.

The oversupply in Hong Kong underscores an unprecedented challenge to property developers in the global financial hub, already grappling with an expat exodus and some of the world’s harshest border controls to curb the virus.

Landlords are becoming more willing to accommodate tenants’ needs, for example with rent-free periods and lease terms that depart from the usual three years, said Ada Fung, an executive director for office services at CBRE Hong Kong. In Kowloon, some are even paying for the fit-out cost for their tenants, she said.

The towers under construction are the first new office buildings in Central, an area packed with skyscrapers housing financial behemoths from Goldman Sachs Group Inc. to JPMorgan Chase & Co., in almost two decades.

Lee’s Henderson Land Development Co. is building a glass tower shaped like a flower designed by Zaha Hadid Architects. Just across the road, Li’s CK Asset Holdings Ltd. is redeveloping the stolid 1970s-era Hutchison House into a brand new skyscraper. Both of the state-of-the-art buildings are set to open next year. The last time leading local developers completed an office building in the prime real estate district was the tower serving insurer AIA Group Ltd. in 2005.

Plans to start development of the towers had already begun before the pandemic’s onset reshaped demand for office blocks. So far, information on who will lease space has been largely undisclosed. Henderson Land has announced one tenancy for the new tower. Auction house Christie’s will occupy four floors in the 36-story building. CK Asset hasn’t released any information about the pre-leasing progress for the 41-story Cheung Kong Center Two.

Oversupply of workspace is even more pronounced in other business districts in Hong Kong. Kowloon East will see four office towers spanning more than 2 million square feet complete in 2022. Across the Victoria Harbour, Swire Properties Ltd. is finishing its Two Taikoo Place with 1 million square feet of floor area this year.

There will be a new supply of 4 million square feet in 2022 across the territory, only 3% of which has been pre-committed, according to Savills Plc in December.

Given the sustained increase in supply in the next couple of years, “it will take quite some time to absorb the vacant space,” Fung said.

Mainland Chinese companies lease about 30% of Central’s grade A office buildings, up from less than 5% in 2008, according to Savills Plc.

However, with borders still shut with the mainland, executives can’t come over to the city to inspect office space in Hong Kong. Even when they do, it’s unlikely that they will splurge on large amounts of workspace like they used to.

“The biggest market for them is mainland China after all. It will be easier for them to conduct research or meetings in the mainland,”said John Lam, head of China and Hong Kong real estate research at UBS Group AG. Therefore they don’t have much need to keep a large office portfolio in the city or expand, Lam added.

While the take-up speed will be slow, the two new buildings in Central may fill up after about one year, according to Patrick Wong, a real estate analyst at Bloomberg Intelligence. Existing tenants in Central may migrate to the pair of buildings for their new facilities, putting pressure on the landlords’ competitors including Hongkong Land Holdings Ltd. and Champion REIT, he added. Hongkong Land is Central’s biggest landlord with 12 properties while Champion REIT has a building on the periphery of Central.

The diminishing need for office space from global firms is also set to worsen the vacancy situation. International banks in Hong Kong have been relinquishing space to bring down costs. Around a year ago, BNP Paribas SA and Standard Chartered Plc decided to give up floors in their headquarters in the city.

Hong Kong’s aggressive virus controls, including a quarantine of up to 21 days for arrivals, reduces incentives for foreign firms to occupy more space in the city. Expatriates are increasingly considering relocating elsewhere because of the difficulties to travel.

To be sure, Hong Kong’s vacancy rate of 9.8% in the fourth quarter of last year is still low compared to 14% in New York, according to data from Jones Lang LaSalle. Reduction in rents across the territory remains modest -- grade A office rents on average fell by 4.7% in 2021, compared to 19.3% the year before, according to Cushman & Wakefield.

Still, rents are set to remain under pressure against the backdrop of increased supply, in contrast with rival Asian financial hub Singapore. Rental values in the Southeast Asian city-state may overtake those of Hong Kong for the first time since 2009, according to Bloomberg Intelligence.