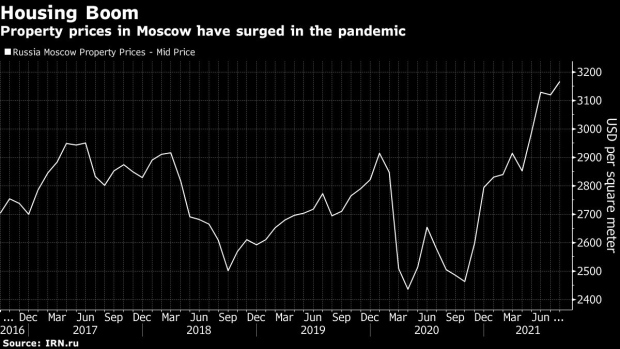 Russia’s property tycoons are minting vast fortunes after a government move to boost the market during the pandemic helped spur a housing boom.

Sergey Gordeev, the controlling shareholder, chairman and chief executive officer of PIK Group, has seen his net worth more than double this year to $8.9 billion, according to the Bloomberg Billionaires Index, as shares in Russia’s biggest developer surged. Pavel Golubkov and Mikhail Kenin’s stakes in their property firm, Samolet Group, are each worth more than $1 billion after its stock soared more than fivefold in 2021.

Real estate markets across the world have been red-hot during the coronavirus outbreak, supported by low interest rates, reduced supply and demand from people who are stuck at home and are buying larger residences or making new investments.

Those factors are also at play in Russia, but there’s another important reason: President Vladimir Putin’s government introduced a mortgage-subsidy program in April 2020 to stimulate demand amid the pandemic and a slump in the country’s key export, oil.

Property prices have since taken off, and Samolet, at least, says the good times have room to run.

There is “huge” demand for housing, CEO Anton Elistratov said in an interview, pointing to large flows of people into Moscow and St. Petersburg, the two biggest cities. “But the supply is very limited.”

Russia’s housing prices jumped 14.4% in the 12 months through June compared with a year earlier, according to Knight Frank’s Global House Price Index report, putting the country in the top 10 globally for price growth. Mortgage originations rose to 545 billion rubles ($7.5 billion) in June, up 150% from the same month in 2019, according to Russian real estate research firm Cian.

“The pandemic made people stay at home,” said Yury Ilin, PIK’s vice president for capital markets and corporate finance. “They realized they want bigger places to live and had enough time to find them. Plus, they didn’t travel much and spent more domestically.”

But as early as last July, officials were warning about the sustainability of the boom.

Coronavirus subsidies risk inflating a housing bubble in the country among people who aren’t solvent enough to take out mortgages, Deputy Finance Minister Alexei Moiseev said at an online conference that month.

“A mortgage is a loan for many years and it must be paid,” Bank of Russia Governor Elvira Nabiullina said last week in an interview with local media RBC Daily. “There should be an appropriate level of family income for it.”

Adjusted for inflation, Russian incomes have been sliding for much of Putin’s two most recent presidential terms, hurt by weak economic performance and accelerating inflation.

In a report in August, the central bank said the risk of the mortgage market overheating had decreased as a result of factors including the changes to the program.

Apartment Prices Surge in Russia, Raising Fears of a Bubble

Gordeev owns 59% of PIK, which focuses on building housing primarily in Moscow. The company reported revenue of $5.3 billion last year. Its stock is up 148% in 2021.

Golubkov and Kenin founded Samolet in 2012 as a developer focused on mass-market high-rise apartment blocks on the outskirts of Moscow. They and their partners sold almost 10% of the company this month to the billionaire God Nisanov. Samolet’s shares have risen 483% in 2021.

“At the moment Samolet stock looks heavily overbought and we expect a correction,” said Finam analyst Natalia Pyreva. “The change in terms of the mortgage-subsidy program will lead to a slowdown in demand in the second half of this year, while supply in the market is growing. It should stabilize housing prices.”

The subsidies are currently set to end in less than a year. Samolet’s Elistratov said the company is looking for new growth areas, including premium real estate. PIK has also been seeking to diversify, launching its first residential project outside Russia this year.