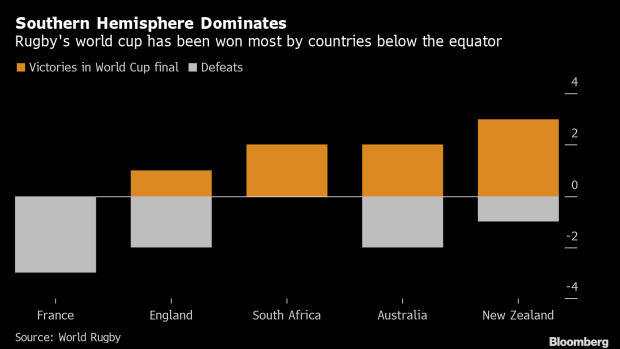 (Bloomberg) -- The typhoon bearing down on Japan may have come at just the right time to help the host nation’s team advance to the quarterfinals of the Rugby World Cup, but it’s done no favors for bookmakers or bettors.

Two games pitting England against France, and New Zealand against Italy have already been called off as Typhoon Hagibis approaches. A decision on whether to scrap a crunch match in Yokohama between Japan and Scotland is set for Sunday morning -- if it’s called off, Japan goes through to the knockout stage and the Scots go home.

A canceled match is scored as a 0-0 draw, a result that’s never happened in tournament history. That would lead to an expensive payout for bookies because Japan wasn’t favored to make the quarterfinals, but it was heavily backed by punters.

“Japan have been very well backed, so the match being canceled will cost the bookies,” said Rupert Adams, a spokesman for William Hill. If the match doesn’t go ahead, “some people who have bet on Scotland are going to be disappointed.”

How the scenarios rank for William Hill:

Worst case: The match goes ahead. Japan wins. Bottom line: big payouts on the match result and for Japan reaching the quarters. Plus, there’s a potential huge payout if Japan were to win its next three matches and lift the trophy.

Second-worst outcome: The match is canceled. Japan advances, as above, and loses its next match.

Best scenario: The match goes ahead. Scotland wins to advance to the quarterfinals, as it was priced to do before the tournament began. But there’s a caveat: One London-based bettor stands to make 1 million pounds ($1.3 million) if Scotland goes on to win the whole thing.

There’s still a chance of the match going ahead. William Hill is offering odds of 1/3 for it to happen and 9/4 odds that it won’t. If the teams do play, the bookies are predicting a nail-biter with Scotland 3/4 to win and Japan, who already beat one of the favorites Ireland, at 13/10 to pull off another shock.

While William Hill is refunding all bets placed on canceled matches, all wagers placed on teams eliminated by the weather to reach the quarterfinals and beyond will be lost.

William Hill, which until this week hadn’t had any bets on weather disruption, is now taking wagers on further games being postponed. It’s offering odds of 25/1 on weather delaying the Nov. 2 final.

Japan is regularly hit with typhoons from July to October. Hagibis is shaping up to be the biggest storm of the Pacific season, and while it will weaken as it approaches Japan, it’s expected to cause very strong winds and flooding across large parts of the country. The situation has also put this weekend’s Formula 1 Grand Prix in Suzuka at risk.

Paddy Power on Thursday said it would pay out on all bets for Ireland, Scotland and Japan to reach the quarterfinals, even though only two of them can actually do so. It also refunded bets on the canceled games.

“The Rugby World Cup makes Brexit look straight-forward and well-planned at the minute –- it is absolute chaos,” Paddy Power said in a statement. “We don’t think punters should miss out, which is why we’re paying out now on all three teams.”

The other pool A match between Ireland and Samoa will proceed as scheduled as the venue is in southern Japan’s Fukuoka, away from the storm’s path. Ireland will be desperate to get a bonus point win, with various permutations still possible to decide the top three positions.

The runner up in pool A will face the All Blacks in the quarterfinals, while the winners will take on South Africa. That could give Japan a chance to repeat the biggest one-off surprise in Rugby World Cup history from four years ago, when the inspired Blossoms beat the Springboks at odds as high as 80/1.

Only four teams, led by New Zealand with three titles, have ever won the trophy. New Zealand is still the overwhelming favorite at 11/10, closely followed by South Africa and England at 4/1. The firm’s biggest potential liability is if England hoist the trophy.

To contact the reporter on this story: James Amott in London at jamott@bloomberg.net

To contact the editors responsible for this story: Andrew Davis at abdavis@bloomberg.net, James Ludden