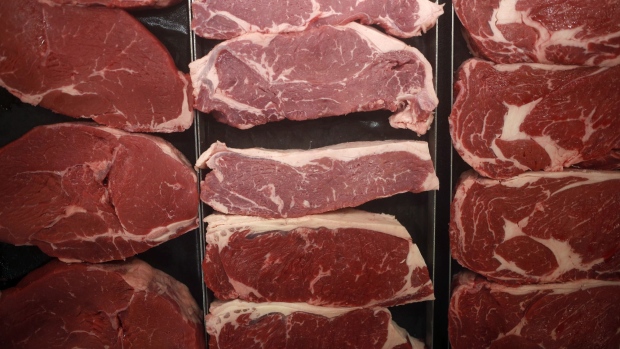 John Tyson, the billionaire whose family business reigns as the largest meat processor in the U.S., took out ads in national newspapers to complain about a “breaking” food supply chain.

No one would argue that supplies aren’t an issue right now. Even Donald Trump is invoking the Defense Production Act to secure meat production. But the roots of this problem go back to decades of consolidation that Tyson’s own company helped lead.

Tyson Foods Inc. and its top two rivals -- JBS SA and Cargill Inc. -- control today about two-thirds of America’s beef, and the large bulk of it gets processed in a few dozen giant plants. Pork and chicken are similarly dominated.

While Tyson pointed out that the pandemic has affected businesses of all sizes, the producers, which also include Smithfield Foods Inc., have such a stranglehold on output that it leaves the supply chain with few remedies when even just a handful plants are down.

There have been about 12 closures at U.S. slaughter plants this month because of coronavirus outbreaks among employees who are jammed together on processing lines.

That’s wiped out roughly 25 per cent of pork-processing capacity and 10 per cent for beef -- enough for analysts to say that the country was weeks away from shortfalls. Meat prices are already surging.

“This is 100 per cent a symptom of consolidation,” said Christopher Leonard, author of “The Meat Racket,” which examines the protein industry. “We don’t have a crisis of supply right now. We have a crisis in processing. And the virus is exposing the profound fragility that comes with this kind of consolidation.”

In his plea to the public, Tyson, the company’s chairman, suggested meat plants should keep running, despite the outbreaks. Late Tuesday, Trump signed an order for the facilities to stay open amid the pandemic.

The move drew sharp criticism from unions and activists who want to protect workers that find it extremely difficult to practice social distancing in the cramped factories.

“This pandemic has affected businesses across our nation, in every sector of the economy, regardless of size, service, location, or ownership,” Tyson said in emailed response to questions from Bloomberg. “It’s also affected thousands of farmers and ranchers, whose continued viability is extremely important to us.” 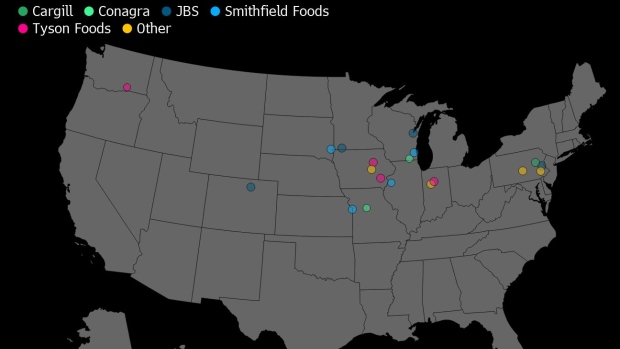 There’s a reason meat is so cheap in America compared with the rest of the world. A big part of that is the rapid consolidation that’s allowed meatpackers to operate on huge economies of scale and run lines at lightning speeds that continue to increase.

The number of slaughtering plants has plummeted about 70 per cent since 1967, according to the U.S. Department of Agriculture. A huge chunk of that consolidation came in just the past few decades.

In a 2019 report, Tyson lists an acquisition or a consolidation for almost every year of operation starting from 2001, though some of those deals were in packaged food and sometimes made outside the U.S.

In Europe, it’s a different story. The top 15 companies account for less than a third of the European Union’s meat production, and the region has seen far fewer disruptions to supply.

In normal times, the U.S. concentration is touted as a hallmark of a successful industry that’s become extremely efficient at pumping out huge amounts of affordable meat -- something that’s reaped rewards for the companies and investors alike.

Tyson clocks in annual net income of about US$2 billion and its shares have surged about 60 per cent in the last five years, bringing its market value to about US$23 billion.

But in the virus era, the vastness of these companies is a crucial point of vulnerability for U.S. food supply.

Huge plants are responsible for processing thousands of animals per day.

Advocacy groups like Food and Water Watch have long called for a break in the concentration, and they say the pandemic makes that more important.

“The highly consolidated, industrial food system is in fact less resilient than the regional, diversified systems it replaced,” Amanda Claire Starbuck, a senior food researcher at Food and Water Watch, said in a posting on its website. “We need smaller, more diverse crop-and-livestock systems and regional food hubs.”

But it’s hard to say if Americans would actually go for that, since it would also undoubtedly bring an increase in meat prices.

“There’s a moral obligation to bring low-cost food to American consumers as not everyone can afford to buy grass-fed beef or antibiotic-free pork,” said Steve Meyer, an economist at Iowa-based Kerns and Associates.

Practically every food company has announced increased measures to protect employees, including meat giants like Tyson, Smithfield and Cargill. Companies are enforcing hand washing and spraying down plants and break rooms. Shifts are staggered and lunch breaks are taken alone.

Still, it’s been hard to stop the spread of the disease in massive plants where hundreds of employees show up for each shift.

Twenty workers in U.S. meatpacking and food-processing plants have died and at least 6,500 have been directly impacted by the coronavirus, according to the United Food and Commercial Workers Union, America’s largest private-sector union.

Plants that remain open are also facing a worker crunch as employees call in sick and deal with child-care issues and the other complexities the virus has unleashed. Meat processing plants require a lot of labor to disassemble, trim and de-bone carcasses.

While some companies have stepped up hiring, it’s not easy to find workers, even with rising unemployment.

The industry has struggled with a reputation of difficult conditions since the days of Upton Sinclair, the American author who wrote of abuses in his 1906 novel, “The Jungle.” Producers often rely heavily on immigrant workers to fill jobs that Americans shun.

The problem of consolidation isn’t limited to the U.S. Nearly all the beef sold in Canadian grocery stores and exported from the country comes from just three meatpacking plants. A halt at one of those facilities is forcing McDonald’s Corp’s Canadian unit to start importing.

“I do expect for the U.S. and Canadian governments to look very closely at how things are done today and how we need to do it differently to protect the national interest, so if and when such an event happens again, we’re better prepared for it,” said Kevin Kenny, chief operating officer of Decernis, an expert in global food safety and supply chains.