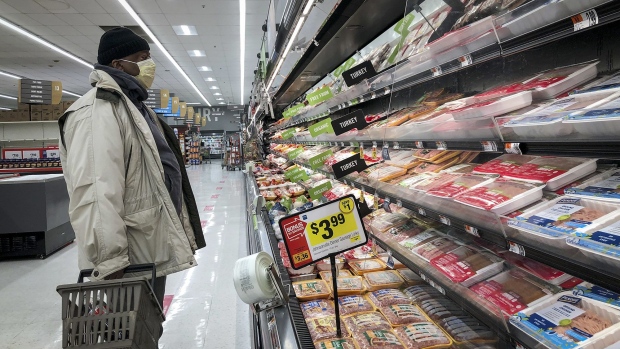 WASHINGTON, DC - APRIL 28: A man shops in the meat section at a grocery store, April 28, 2020 Washington, DC. Meat industry experts say that beef, chicken and pork could become scarce in the United States because many meat processing plants have been temporarily closed down due to the coronavirus pandemic. Tyson Foods took out a full page advertisement over the weekend in several major American newspapers, warning that the food supply chain is on the cusp of breaking. (Photo by Drew Angerer/Getty Images) , Photographer: Drew Angerer/Getty Images North America

(Bloomberg) -- America’s biggest meat company is the latest to come under investor pressure to conduct an independent racial equity audit.

Tyson Foods Inc. should assess whether its policies and practices impact communities of color, according to a shareholder proposal from American Baptist Home Mission Society. Concerns include everything from a lack of opportunity for promotions for minorities, to allegations of discrimination and harrassment at the company. Tyson said it has established programs to support minorities, and even hired a chief diversity, equity and inclusion officer.

Recommendations for racial equity audits emerged in the last proxy-voting season following the civil unrest fueled by the murder of George Floyd last year. Investors filed resolutions with companies from Amazon.com Inc. to JPMorgan Chase & Co. to investigate whether their businesses were perpetuating racial discrimination. While the resolutions failed to pass, they garnered substantial support -- 44% of votes in Amazon’s case -- and some companies like BlackRock Inc. agreed to conduct them. Starbucks Corp. and Airbnb Inc. already completed such audits.

It’s no surprise the meat industry is a target for such proposals. It relies on large numbers of minorities and immigrants for the grueling and sometimes dangerous work of slaughtering animals. When those meat plants became early hotspots in the Covid-19 outbreak last year, worker advocates complained that the disparities in the outbreak amounted to racial discrimination. Tyson said it has vigorously sought to protect its workers from the virus, spending $700 million to combat outbreaks and hiring a chief medical officer.

Tyson has had its share of diversity headaches. The company was accused of misleading interpreters about the severity of the virus outbreak at an Iowa pork plant and fired managers accused of betting on how many workers would get sick.

In a statement to Bloomberg, Tyson said it was reviewing the shareholder proposal. It said claims about the interpreters were part of a pending lawsuit, and that the company “worked hard to provide coronavirus training and education in multiple languages to our team members to help ensure they’re safe.”

“The diversity of our workforce is one of the things that makes us proudest,” Tyson said, with 27% of employees Hispanic or Latino, 25% black and 11% Asian American, speaking 50 different languages. Tyson said it offers workers free language classes, and has a career-development program that gives front-line workers free training and workforce certifications.

In June, Tyson hired its first chief diversity, equity and inclusion officer to make sure each level of employment is diversified.

ABHMS co-filed the proposal last month with 16 other investors including Sisters of the Good Shepherd, Province of New York and Sisters of St. Francis of Philadelphia.

Based in King of Prussia, Pennsylvania, ABHMS has been a Tyson investor since 2005, and its Common Investment Fund managed $255 million at the end of last year. In the resolution, the investor asked the meat producer to identify and recommend steps to eliminate business activities that further systemic racism and include input from impacted workers.

“Tyson is the focus of allegations of workplace racial discrimination and harassment and has a poor record of racial diversity on its board of directors,” David Moore, director of investments at ABHMS, said in an emailed statement. The proposal will “further the discussion about the racial equity impacts of Tyson’s business activities,” he said.

Of Tyson’s 14 board members, two are people of color and four are women.