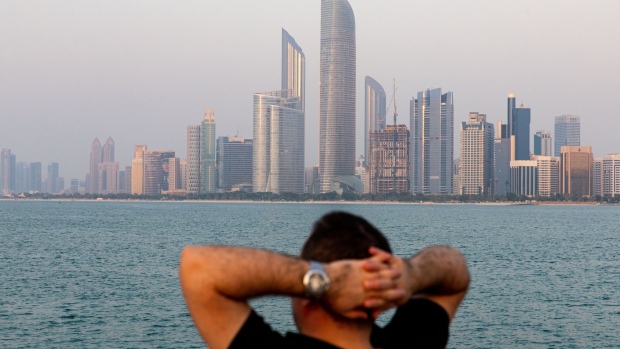 A visitor looks at the view of the city skyline from a breakwater in Abu Dhabi Photographer: Christopher Pike/Bloomberg , Bloomberg

(Bloomberg) -- A top executive at Abu Dhabi sovereign wealth fund Mubadala Investment Co. called on Israeli start-up investors to operate in the Gulf Arab region, in a new sign of warming ties between the countries.

“We need to welcome all sorts of investors, even investors that are very active in Israel, Israeli investors that ultimately come to see opportunities in the region,” said Ibrahim Ajami, head of Mubadala’s venture capital arm. “I don’t see a reason why we should not do that,” he said.

Ajami was speaking at a panel on venture capital at the Milken Institute conference in Abu Dhabi. Joining him was Avi Eyal, co-founder and managing partner of Entree Capital, a venture capital firm that focuses heavily on Israel. Ajami said he and Eyal have invested together twice and have been working together “for a couple of years now.”

Eyal, speaking directly to Ajami, offered to set up a fund in the U.A.E. capital.

“I’ll help you start an early-stage fund here in Abu Dhabi,” he said. “I’ll make sure that I bring my friends from Europe, from Israel, everywhere else to help maintain it, to help make it a success,” he added, and then the two men shook hands.

Gulf states don’t formally recognize Israel and nominally maintain an economic boycott against it. But business ties and warming diplomatic relations between the Jewish state and its Arab neighbors in the Gulf have been an open secret for years.

Those ties will be on display in October, when Israel opens its pavilion at the World Expo in Dubai, the U.A.E.’s largest city.

To contact the reporters on this story: Nicolas Parasie in Dubai at nparasie1@bloomberg.net;Mahmoud Habboush in Abu Dhabi at mhabboush@bloomberg.net

To contact the editors responsible for this story: Lin Noueihed at lnoueihed@bloomberg.net, Amy Teibel, Mark Williams