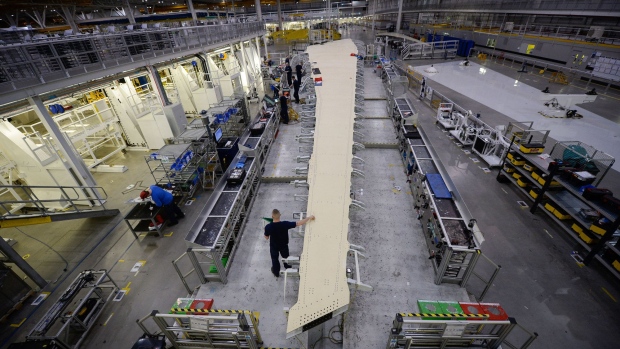 A wing stands in a bay on the Airbus SE A350 wing production line at the Airbus SE assembly factory in Broughton, U.K., on Monday, Jan. 16, 2017. Airlines are turning to twin-engine planes like Airbus's A350 and Boeing Co.'s 787 Dreamliner for long routes. , Bloomberg

(Bloomberg) -- The U.K. aerospace industry plans to create a 1 billion-pound ($1.3 billion) fund to prop up suppliers, the Sunday Times reported, without saying where it got the information.

Trade association ADS Group has drafted proposals aimed at helping small businesses hurt by production cuts at planemakers as the coronavirus crisis suppresses demand for travel, according to the newspaper.

The U.K. government is being urged to match any private-sector pledges from companies that could include Toulouse, France-based Airbus SE, which makes the wings for its jets in Britain, the report said. Stakes could be taken in smaller suppliers under the plans, it said.

ADS has been coordinating the U.K. Aerospace Supply Chain Task Force, which aims to provide short-term support to keep parts providers from folding and help enable recapitalization and strategic investments.

Members include U.K. manufacturers such as Rolls-Royce Holdings Plc and GKN, together with overseas firms like Airbus and Canada’s Bombardier Inc. The Department for Business, Energy and Industrial Strategy is also represented, ADS said July 9.

Tom Williams, a retired Airbus executive who is chairman of the task force, said last month that 20 to 30 U.K. suppliers are at risk and that the industry could shrink as much as 40% over the next three years.