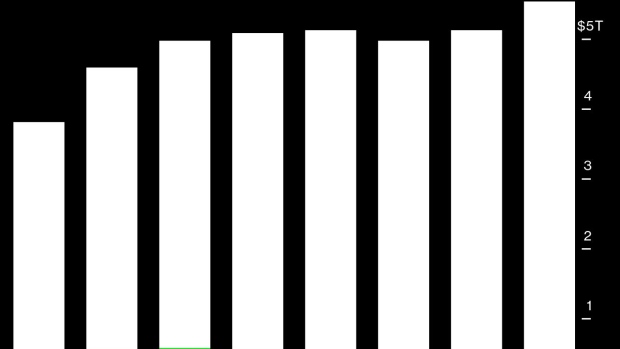 A crane unloads the first shipment of anthracite coal from U.S. supplier XCoal Energy & Resources LLC, for state energy firm Centrenergo PJSC, onto the dockside at Yuzhny Port, near Odessa, Ukraine, on Wednesday, Sept. 13, 2017. A Pennsylvania company will send 700,000 tons of coal to Ukraine in a deal the administration of President Donald Trump heralded as an important tool to undercut the power Russia has over its European neighbors. Photographer: Vincent Mundy/Bloomberg , Photographer: Vincent Mundy/Bloomberg

(Bloomberg) -- The Group of Seven nations are closing in on agreement this month to phase out fossil-fuel subsidies after the U.K. won backing for the proposal from Italy.

The British, this year’s hosts, have been pushing the G-7 countries to put a date on when they will stop government funding for the energy sources that produce greenhouse gases, including internationally, and to eliminate the use of coal, according to a draft ministerial statement seen by Bloomberg. The British government also wants the members to commit more funds toward easing the transition, particularly in developing countries.

In the lead up to this month’s meeting of G-7 environment and climate ministers, Italy had been dragging its feet on some of the financial aspects of the proposed measures, according to people familiar with the talks, but a minister said on Monday that Mario Draghi’s government would back the plans.

“I can confirm the commitment of Italy to sharing the objectives of the British presidency of the G-7 on environmental issues,” Roberto Cingolani, minister for ecological transition, said in a phone interview. “There is absolutely no reluctance from the Italian government.”

Efforts to tackle climate change through the G-7 and the broader G-20, which also includes China and India, were stymied in recent years by U.S. President Donald Trump. But Joe Biden has changed the calculus with a promise to end U.S. fossil fuel subsidies. He’s already ordered federal agencies to eliminate fossil-fuel aid, though he’ll need support from Congress to fully deliver on his campaign pledge.

The G-7 and other international forums have tried in the past to put an end to fossil fuel subsidies but failed to reach agreement on the crucial details of a specific timeframe and definitions. By contrast, the objectives proposed by the U.K. are seen by negotiators as both ambitious and tangible.

Annual fossil fuel subsidies were valued at $5.2 trillion in 2017, equal to 6.5% of the global economy, according to the International Monetary Fund. China was the biggest subsidizer in 2015, followed by the U.S., Russia, the European Union and then India. The IMF found that more efficient fossil fuel pricing in 2015 would have cut carbon emissions by 28%.

A draft statement for the upcoming ministers’ meeting seen by Bloomberg would commit the G-7 nations to:

The ministerial meeting is due to take place virtually 20-21 May. The measures, which provide some leeway for “exceptional circumstances,” are seen as essential to achieving a global target of net zero greenhouse emissions by 2050 and keeping temperatures rises within 1.5°C.

The key parts of the draft text were yet to be agreed by all G-7 members as of Monday morning. Two officials said that Italy and Japan had shown a degree of reluctance in the lead up to the month’s meeting. The U.K. argued that the group needed to set an example for other countries, such as China and India, to follow.

As well as backing the broader targets, Cingolani said Italy specifically supported the move away from coal.

“I hope it will happen even earlier,” he said. “We would like to reduce this capacity substantially already by 2025. We need to be realistic because there is a large industrial component with thousands of workers.” He also said that Italy would increase its financial contribution to help developing countries manage the transition. He declined to comment on the other objectives in the draft as the document is still under discussion, he said.

One official said that parts of the Italian government have come under pressure from energy companies in the past to maintain some subsidies. Italy is hosting this year’s G-20 and partnering with Britain on the UN climate change conference COP26.

Japan is still wrestling with the political legacy of the Fukishima nuclear disaster of 2011 which prompted the government to shut down its reactors, removing a source of emissions-free power. Japan needs to get most of its 36 reactors working again by the end of this decade if it’s to meet its goal of eliminating net emission by 2050, government adviser Masakazu Toyoda says.

The British and Japanese governments declined to comment on the specifics of negotiations, citing the sensitivity of ongoing talks.

Alok Sharma, the U.K. minister in charge of COP26, said in a speech last Friday that this year’s COP “must consign coal to history” and the U.K. was working to end international coal financing. Sharma, who in recent weeks has met with both Japanese and Italian officials, said he wants “to urge countries to abandon coal power, with the G-7 leading the way.”

The G-7 leaders’ summit takes place in June in Cornwall, England, while COP26 will be held in Glasgow, Scotland, in November.