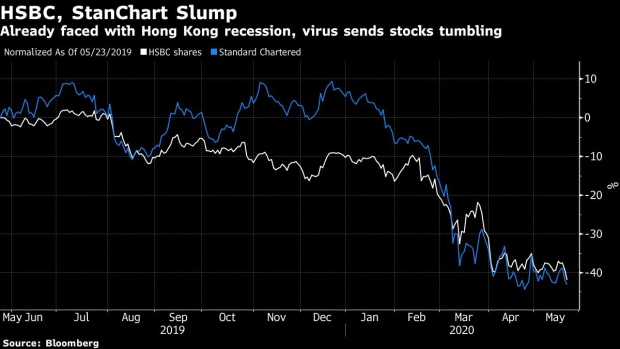 (Bloomberg) -- U.K.-listed banks with heavy exposure to Hong Kong slipped as China’s attempt to tighten its grip on the city fueled a political backlash.

HSBC Holdings Plc dropped as much as 6.5%, the most in about seven weeks, while rival lender Standard Chartered Plc declined 4.7%. Insurer Prudential Plc tumbled 9.8%, its biggest fall in more than two months, before paring losses along with the banks.

China confirmed on Friday that it would effectively bypass the city’s legislature to implement national security laws. The announcement triggered immediate calls for fresh protests and sent the MSCI Hong Kong index to its worst loss since 2008.

“China’s latest move is damaging to gross domestic product, sentiment, loan growth and Hong Kong’s status as a global financial destination,” Bloomberg Intelligence analyst Jonathan Tyce said in written comments. HSBC and Standard Chartered each derive a quarter of their revenue from Hong Kong, and “far more” of their pretax profits, he added.

Banks operating in Hong Kong, as well as luxury-goods makers, have been volatile since the final quarter of 2019 as protests gripped the city, sending it into recession. The global spread of Covid-19 spurred share plunges in 2020.

Prudential, which has seen its shares plunge 28% year-to-date, is also highly exposed to the former British colony. Hong Kong accounted for 23% of the London-based company’s adjusted operating profit in Asia in 2019, more than any other market in the continent, according to the group’s annual report.

And it wasn’t just European financials dropping on the Hong Kong developments, as luxury-goods makers that are dependent on sales in the city also slipped. Cartier watch-maker Compagnie Financiere Richemont SA and Gucci-owner Kering SA fell as much as 4.1% and 2.3% in Zurich and Paris, respectively.