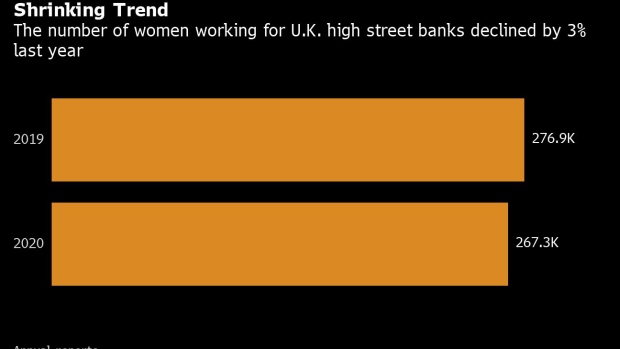 A commuter walks through a passage in the City of London, U.K., on Monday, Oct. 12, 2020. The approach of Brexit has London confronting the loss of its role as Europe's undisputed stock-trading hub and, with it, billions of euros in daily trading. Photographer: Jason Alden/Bloomberg , Bloomberg

(Bloomberg) -- More women than men have left British banks during the pandemic, undermining the sector’s pledges to become more diverse.

The number of women at the U.K.’s five biggest lenders shrank by 3% during 2020, according to data compiled by Bloomberg News, while men saw a decline of about 2.1% as the banks pushed ahead with long-planned cost cuts and adapted to Covid-19.

At NatWest Group Plc, roles filled by women dropped by 9% compared to a 5.2% fall for men. Standard Chartered Plc kept roughly the same number of men but its female staff declined by 2.2%. The banks -- along with Barclays Plc, Lloyds Banking Group Plc and HSBC Holdings Plc -- employ about half a million people globally, broadly even between genders.

The stark split has a variety of causes. British lenders have spent years closing branches -- which are staffed more by women -- as they see customers shifting to online banking. This trend accelerated during lockdown.

Some women are also withdrawing from the workforce, rather than being cut. At Standard Chartered, the gap between male and female job losses “probably relates to the fact that children were home being home-schooled and that burden within the family fell disproportionately to women,” Chief Executive Officer Bill Winters said on a call with reporters after recent earnings.

Dominic Hook, national officer at trade union Unite, said his organization supported large numbers of female staff in finance who have been struggling to juggle working, teaching and caring from home.

“Unfortunately, we can’t do it all,” said Jayne-Anne Gadhia, the former Virgin Money Ltd. boss who led a government review of women in senior finance roles. “Something has to give.”

To be sure, this problem is not unique to British finance. Deloitte found 70% of working women across nine of the largest economies believe their careers will be slowed by the pandemic’s disruption. Millions of women have left the U.S. labor force and the share of women holding roles on Wall Street’s trading floors remains low. In the U.K., official data points to the pandemic arresting a long-term rise in female employment.

And there’s one area of British finance where women have outperformed in the past year: senior leadership promotions. Following Gadhia’s review of the shortfall in 2016, more than 300 firms including the top five lenders signed a pledge to hire more female executives.

However, the pipeline of experienced women could be interrupted by the pandemic. “If we continue to lose women from the workforce, the industry will get further away from filling this gap​​​​,” said Jessica Clempner, a principal at consultancy Oliver Wyman who has also published research on the issue.

It would be a mistake to lose focus on the problem while recovering from the pandemic, according to Gadhia -- even if “in the short term, it could be inevitable” that banks fall behind their diversity goals. “What happens next isn’t inevitable.”