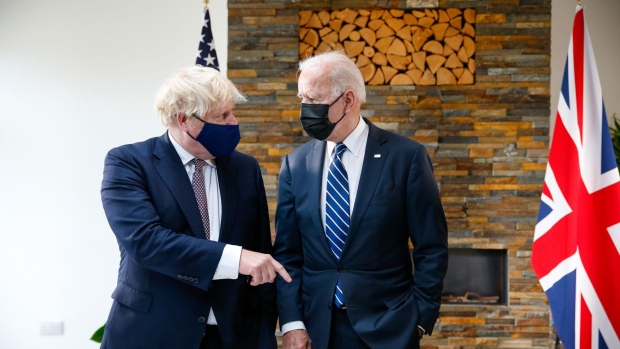 A mural reading 'You are now entering Free Derry' in the Bogside area of Derry, also known as Londonderry, Northern Ireland, on Thursday, Nov. 5, 2020. Nowhere has more at stake than Derry as Britain and the European Union try to thrash out a Brexit trade agreement before the transition period ends on Jan. 1. Photographer: Paul Faith/Bloomberg , Bloomberg

(Bloomberg) -- Prime Minister Boris Johnson will give leaders a beachside welcome, formally kicking off three days of summitry along the English coast after meeting U.S. President Joe Biden for the first time on Thursday.

The focus on Friday will be on the economic recovery as the world’s most-developed nations discuss ways out of the pandemic but also look out for signs of whether Brexit will flares up in meetings on the side.

U.K. Foreign Secretary Dominic Raab blamed the European Union for the delay in resolving issues on the Northern Ireland protocol. He told Sky News that Johnson and Biden didn’t “linger” on the issue during their meeting yesterday.

“The prime minister wanted to raise it and be very clear on our position,” Raab said. “It is the dogmatic, purist approach that the EU has taken which is the risk to the Good Friday Agreement.”

He added that “the ball is very much in the EU’s court” as to whether the issues will be resolved before the end of June. -- Kitty Donaldson

After several corona infections surfaced in a hotel in St. Ives, one member of the German exploratory delegation has precautionarily gone into quarantine, German Chancellor Angela Merkel’s office confirmed. Officials were at pains to stress that it would not affect the chancellor’s trip. She is due late morning, in time for the family photo. -- Arne Delfs

There was a fair bit of anticipation about how Johnson and Biden would get on and indeed if they would hit it off. Ahead of the meeting, there were concerns that Johnson was in for a scolding on Northern Ireland, but that did not materialize. There are still real differences over how Brexit is unfolding but both leaders put on a good show and have a lot of shared goals, from climate to security.

The White House announced Friday morning that the U.S.-brokered tax agreement would be a focus of Biden’s meetings at the G-7, calling it “a critical step towards ending the decades-long race to the bottom that pushes nations to compete over who can offer the lowest tax rate to large corporations at the expense of protecting workers, investing in infrastructure, and growing the middle class.”

Treasury Secretary Janet Yellen played a key role in brokering the landmark deal, which G-7 finance ministers sealed last weekend in London. Still, a final, global deal remains a long way off. Talks will continue next month, when Italy hosts Yellen and colleagues for a Group of 20 meeting. Any accord must also have support from a majority of about 140 nations involved in negotiations under the Organization for Economic Cooperation and Development. -- Kate Hunter