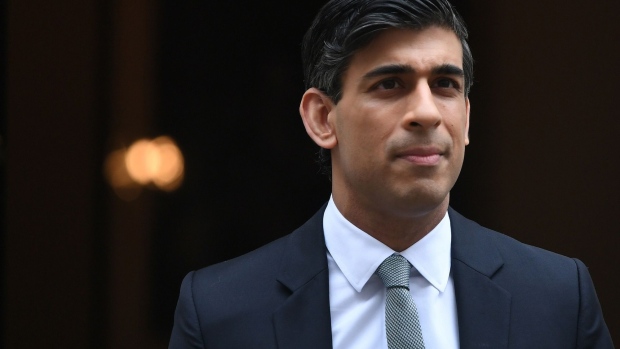 LONDON, ENGLAND - MARCH 03: Chancellor Of The Exchequer, Rishi Sunak stands outside 11 Downing Street ahead of the Chancellor of the Exchequer's delivery of the budget on March 3, 2021 in London, England. The Chancellor, Rishi Sunak, presents his second budget to the House of Commons. He has pledged to protect jobs and livelihoods as the UK economy has faced crisis during the Coronavirus Pandemic. (Photo by Chris J Ratcliffe/Getty Images) , Photographer: Chris J Ratcliffe/Getty Images Europe

U.K Chancellor of the Exchequer Rishi Sunak is on track for a windfall of around 10 billion pounds ($13.5 billion) this financial year as borrowing figures for the first nine months came in well below official forecasts, despite a sharp rise in debt interest costs.

The figures raise the prospect of extra cash for Sunak just as he faces demands to ease the cost of living pressure on households and businesses. He is expected to unveil a multi-billion pound package of support at the Spring Statement on March 23.

The undershoot was delivered despite an 8.1 billion-pound debt interest bill in December, the second-highest on record, as soaring retail price inflation fed straight through to index-linked gilts.

The total increase in debt interest between April and December was 21 billion pounds compared with last year, or a rise of 69%, but receipts came in significantly higher as the economy held up better than expected. Corporation tax revenues were the highest on record.

Borrowing between April and November was revised down by 6 billion pounds, the figures show.