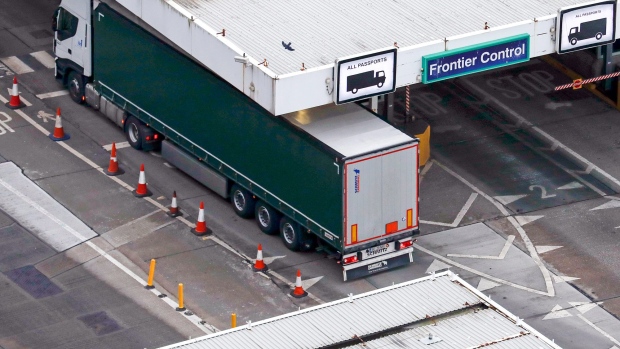 A truck enters a border control post at the Port of Dover Ltd. in Dover, U.K., on Saturday, Jan. 5, 2019. The port, which operates 120 ferries a day carrying 10,000 trucks, accounts for 17 percent of the U.K.'s trade in goods. , Photographer: Bloomberg/Bloomberg

(Bloomberg) -- Britain’s plans for its border controls after Brexit will depend on a new and untested IT system being ready in time, according to a 206-page government blueprint that sets out the extra burden businesses will face from the year-end.

In the document, entitled “The Border With The European Union” and seen by Bloomberg News, the government details the restrictions that will hit hauliers after the post-Brexit transition period ends on Dec. 31. Among the main obstacles will be the requirement to seek explicit permission from the tax authorities before they are able to move goods to ports.

Key to the U.K.’s post-Brexit border plan is a new IT system, known as the Goods Vehicle Movement Service, which will tell a truck whether it has the right clearances to travel to the EU. The system isn’t due to be ready until July next year. Before it is ready, hauliers will still need permission from the government before moving goods to the U.K.-EU border.

U.K. Business Urged to Prepare for End of Brexit Transition

The new regime is part of the government’s preparations for leaving the EU single market and customs union at the end of the year. Even if the U.K. and the EU manage to sign a free-trade agreement before the transition period ends, companies will face new obstacles to commerce in the form of additional border controls and paperwork.