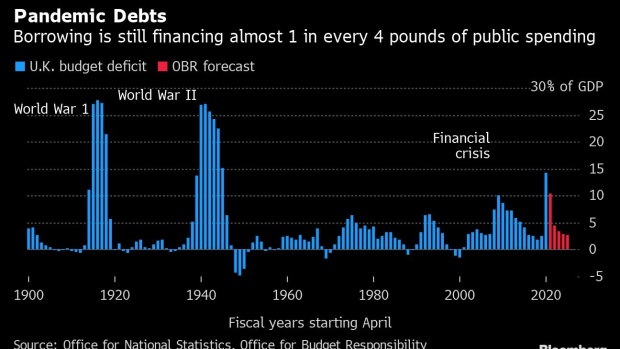 (Bloomberg) -- U.K. government borrowing in the first four months of the fiscal year was running at little more than half the level a year earlier as the economy returned to normality after months of restrictions.The budget deficit stood at 78 billion pounds ($106 billion) between April and July, the Office for National Statistics said Friday. That compares with 139.7 billion pounds in the same period of 2020, when the economy was under siege from the coronavirus pandemic. July alone saw the deficit narrow to just 10.4 billion pounds as self-employed workers made payments ahead of a tax deadline. The shortfall was smaller than economists forecast. Tax revenue surged by almost 16% from a year earlier, and spending fell 3.5%.

The overall improvement reflects a stronger-than-forecast recovery from the worst economic slump in 300 years. For the public finances, the pickup is translating into more tax revenue and less spending on pandemic support such as furlough payments. That’s a boost for Chancellor of the Exchequer Rishi Sunak, who saw the budget deficit balloon to a peacetime high of over 14% of GDP in the 2020-21 fiscal year. It means borrowing this year could undershoot the 10.3% of GDP forecast by the fiscal watchdog, giving Sunak scope for some giveaways in his review of departmental spending later this year.