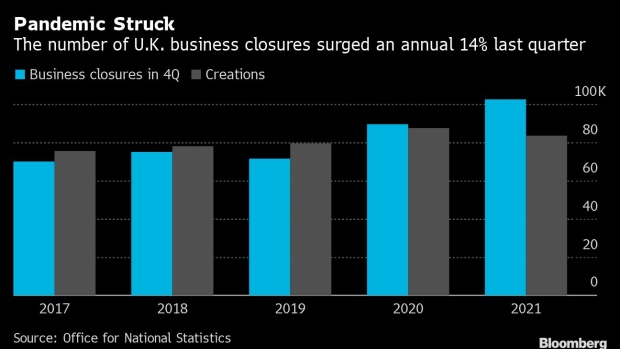 A shopper walks past a closing down sign in the window of the now closed House of Fraser Ltd. department store on Oxford Street in central London, U.K., on Thursday, Jan. 20, 2022. The U.K. Office for National Statistics are due to release their latest retail figures on Friday. Photographer: Chris J. Ratcliffe/Bloomberg , Bloomberg

Business closures in the U.K. jumped by 14% from a year ago in the fourth quarter as the coronavirus pandemic took a brutal toll.

Almost every industrial group saw the number of closures rise, with the transport and storage sector posting the largest increase, the Office for National Statistics said Thursday. Only finance and insurance bucked the trend.

Meanwhile, business creations were 4% lower than in the final three months of 2020. Construction saw the largest increase in creations, while retail registered the largest decline.

The figures reflect the pressure on small companies in particular during more than a year of on-off lockdowns and restrictions to contain the coronvirus. By December, almost one-in-seven companies reportedly had no cash reserves remaining.

The data show the number of business removed from or added to a government register of operating enterprises. A firm is removed from the Inter-Departmental Business Register if its turnover and employment are zero for several periods, or if the ONS is made aware that the business has ceased trading.

The number of firms removed was 102,700 in the fourth quarter, the highest figure for the period since the series began in 2017. On average, businesses that closed were smaller than in previous years. The number of firms entered onto the register was 83,720. Nine out of 16 industry groups recorded fewer business births.

While freight services and couriers played a significant role in the both the rise in closures and the fall in creations, the sector had enjoyed a boom during the pandemic as the closure of stores and offices during lockdowns led to increased demand for home deliveries.