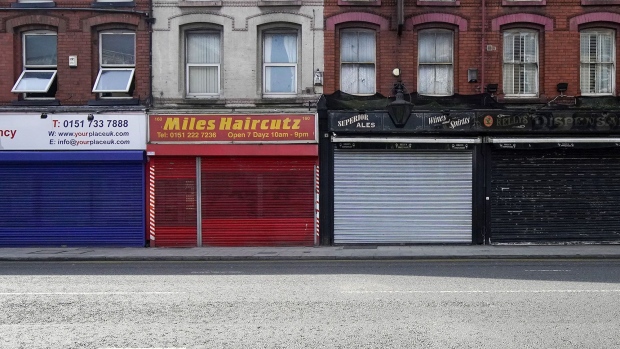 LIVERPOOL, ENGLAND- MARCH 24: Shops are shuttered and closed as the UK begins strict lockdown measures to combat the pandemic on March 24, 2020 in Liverpool, England. British Prime Minister, Boris Johnson, announced strict lockdown measures urging people to stay at home and only leave the house for basic food shopping, exercise once a day and essential travel to and from work. The Coronavirus (COVID-19) pandemic has spread to at least 182 countries, claiming over 10,000 lives and infecting hundreds of thousands more. (Photo by Christopher Furlong/Getty Images) , Photographer: Christopher Furlong/Getty Images Europe

The U.K. government’s rescue plan for small and medium sized companies may be only three days old, but there’s growing concern it won’t be able to stave off a wave of bankruptcies in the world’s fifth-largest economy.

On Wednesday, a chorus of voices ranging from lawmakers to small business trade groups said the Coronavirus Business Interruption Loan Scheme, or CBILS, is too reliant on commercial banks and their traditional underwriting methods to rapidly deliver cash to desperate companies. Critics also said it was sowing confusion and frustration by requiring business owners to put up their personal assets to secure loans in what may be the early stages of a severe economic meltdown.

“This program is going to be too slow, too cumbersome, and too complicated,” said Mark Phillips, a bankruptcy lawyer at South Square Chambers in London. “I think the wave of insolvencies that is coming is going to be bigger than in any recession that I’ve seen, and I have been handling administrations since Margaret Thatcher’s restructuring of the economy in the ‘80s.”

There’s a lot at stake. Small and medium-sized companies account for three out of every five workers in the U.K. and around half the revenue in the country’s private sector.

CBILS, launched Monday by the state-owned British Business Bank, will facilitate emergency loans to companies with less than 45 million pounds ($53 million) in annual sales by guaranteeing 80% of the debt for lenders. Banks bear the risk for the difference. Borrowers don’t have to pay interest or fees for 12 months and the loans will be capped at 5 million pounds and six year terms. About 40 lenders, including HSBC Holdings Plc, Barclays Plc, and Lloyds Banking Group Plc, are taking part in the initiative.

By divvying up the risk, Rishi Sunak, the chancellor of the exchequer and architect of the government’s overall business rescue package, is trying to make sure banks have skin in the game so they’ll lend responsibly. “It’s a sensible and pragmatic approach for companies to get cash out to small businesses,” said Roy Shelton, the managing partner of DropJaw Ventures Ltd., a small business investment firm in Chester, England.

Yet the problem with the plan, Phillips said, is that by asking banks to be responsible for 20% of the debt, the government is forcing them to assess the credit risk of borrowers the same way they would in normal times. With many companies watching their revenues evaporate, they may not have enough resources or time to go through a painstaking loan application process.

Applicants will have to jump through a lot of hoops to qual360687933ify for loans. Some may have to show they have exhausted other potential sources of cash such as equity investors, which can take time. And not only will directors have to prove their businesses were stable before the crisis struck, they will also have to forecast how the pandemic will affect their cash flows for the next two or three quarters.

“A lot of people are just trying to figure out which way is up,” said Jim Shaw, a partner at Shaw & Co., a corporate finance firm in Bristol, England, that is advising companies on how to navigate CBILS. “Making assumptions in this environment is a big problem.”

On Wednesday, Sunak, Bank of England Governor Andrew Bailey and Christopher Woolard, the interim chief executive of the Financial Conduct Authority, wrote a joint letter to the heads of Britain’s banks urging them to “extend lending despite the uncertain economic conditions.”

Responding to the letter, Stephen Jones, the CEO of UK Finance, the banking industry trade organization, said lenders were committed to supporting the economy “through this temporary shock to the fullest extent.”

But the difficulties around the security needed for CBILS loans may deter business owners from using them.

Under the program, lenders cannot ask borrowers to put up their primary residences as collateral but virtually everything else -- second homes, automobiles, furniture, securities -- may be on the table. Shaw said many of his clients are aghast at the idea of risking their personal assets when they don’t know what direction the crisis is going to take, or what the economy will look like when it’s over.

While a 12-month holiday on interest is attractive, CBILS permits the banks to set rates where they see fit. Shaw estimates most major banks will settle on rates at 4 to 5 percentage points more than the Bank of England’s benchmark, which is close to zero. But other lenders may price the loans north of 10% as the market develops, Shaw said.

Responding to the criticism of CBILS, the British Business Bank said it was based on an existing guaranteed loan program for small companies that has worked well since 2009. A spokeswoman said companies would have to produce a “sound borrowing proposal” to qualify and that lenders are free to decide what information they require to analyze applications.

Given all the challenges, it’s little wonder snap polls show business owners are underwhelmed by CBILS. About half the 5,000 companies surveyed this week by MarketFinance Ltd., a London-based online lending firm, said they were unlikely to apply to the program. And two-thirds of them say they are likely to run out of cash by Easter, April 12.

Shaw agrees with attorney Phillips that it would have been wiser for the government to simply guarantee 100% or even 95% of the loans distributed under CBILS. That would have simplified the program and enabled the banks to streamline their underwriting practices and get money on the street much faster, they say.

“The government’s intentions are correct and this program may help larger businesses but it was introduced as a solution for all businesses, and that it is certainly not,” Shaw said.