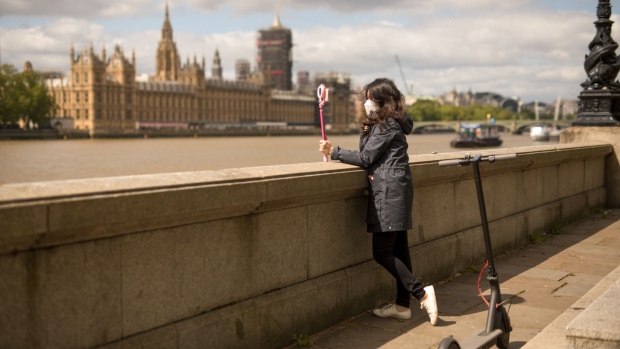 A pedestrian wearing a protective face mask takes a selfie in view of the Houses of Parliament in London on May 11. Photographer: Jason Alden/Bloomberg , Bloomberg

The U.K. doubled down on its Brexit red lines, refusing to compromise in talks over its future trade partnership with the European Union.

With a day to go before the latest round of negotiations ends, there are few signs of significant progress being made, and only seven months left before the deadline for striking a deal at the end of the year.

For Prime Minister Boris Johnson, key obstacles include the EU’s demand for Britain to stick to the bloc’s rules and regulations on goods standards, as well as its call to continue its existing access to British fishing waters.

David Frost, Johnson’s chief Brexit negotiator, briefed the Cabinet on the status of talks at a meeting on Thursday and told ministers the bloc was asking for too much.

“David reiterated that we weren’t and never had asked for anything special bespoke or unique from the European Union,” Johnson’s spokesman James Slack told reporters. “We are looking for a free trade agreement based on precedent and similar to those the EU has already got with other countries like Canada.”

Frost told ministers the EU “has asked far more from the U.K. than they have from other sovereign countries with whom they have reached free trade agreements”, Slack said. The bloc’s excessive demands include access to fishing waters and a commitment for Britain to abide by EU rules on areas such as workers’ rights, he told reporters.

“Cabinet agreed that we won’t agree to demands for us to give up our rights as an independent state,” Slack said. “Cabinet gave its continued full support to the U.K.’s position in the discussions with the EU.”

The comments suggest little headway has been made after four days of talks. The U.K. has said it will take stock next month and could walk away from the negotiations if insufficient progress has been achieved. Leaving without a trade deal would lead to the reintroduction of customs checks and quotas for the first time in a generation.

Johnson’s office also denied there will be big changes to trade with Northern Ireland -- another political flash-point -- after a minister in the province’s devolved assembly said checks on goods moving across the Irish Sea are being prepared.

Britain will meet its obligations under the Withdrawal Agreement’s protocol on Northern Ireland, and there will be no checks on goods except agricultural products, Slack said.

He spoke after Declan Kearney, a junior minister, said the Cabinet Office in London had told him this week that checks on goods moving into Northern Ireland will be put in place.

“The British government has confirmed that it will urgently put in place detailed plans,” Kearney told a panel of assembly members on Wednesday. Those include “physical posts at the ports of entry,” he said.

Businesses have faced confusion over checks they might face after the Brexit transition period finishes at the end of the year.

Johnson said in November there will be no checks on goods entering Northern Ireland, telling businesses faced with customs paperwork to call him “and I will direct them to throw that form in the bin.”

But under the terms of the Withdrawal Agreement, checks will be needed on goods moving into Northern Ireland that could travel on into the Republic of Ireland, which is in the EU. The concession was central to breaking the Brexit deadlock last year and any concern Britain is trying to renege on it could put a trade deal between the U.K. and EU in jeopardy.

“We have always been clear that there will be requirements for live animals and agrifood, building on what already happens at ports like Larne and Belfast,” the Cabinet Office in London said in a statement. The government wants to ensure the “new administration procedures are streamlined and efficient.”

(Updates with detail in 8th paragraph)