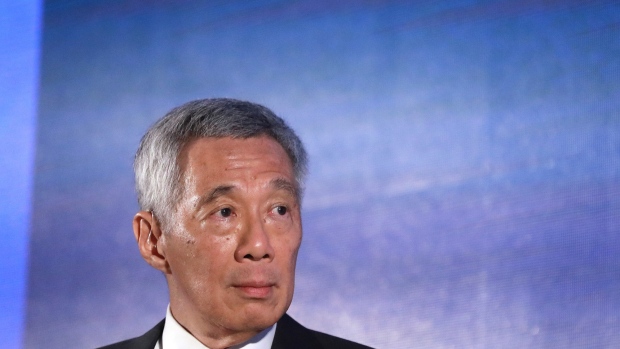 Lee Hsien Loong, Singapore's prime minister, pauses during a Q&A panel at a dinner in honor of the Bloomberg New Economy Forum on Tuesday, Nov. 6, 2018. The New Economy Forum, organized by Bloomberg Media Group, a division of Bloomberg LP, aims to bring together leaders from public and private sectors to find solutions to the world's greatest challenges. Photographer: Giulia Marchi/Bloomberg , Bloomberg

(Bloomberg) -- The U.K. can’t use Singapore as a post-Brexit model of a small nation that succeeded after leaving a bigger union because the two nations exited under different circumstances, Prime Minister Lee Hsien Loong said.

The two countries also have "completely different" histories and social welfare systems, Lee said in an interview with Bloomberg Editor-in-Chief John Micklethwait at the New Economy Forum in Singapore. He was responding to a question on whether London can be a "Singapore on the Thames" after Brexit.

“You will have to find a different way to prosper having made the decision to leave the EU," Lee said. "Maybe, maybe if you look at Singapore, you might think you have some ideas that you can use, we hope so. But I don’t think you can take one society’s solution and just plonk it on a different society."

Singapore was expelled from the Malayan Federation in 1965, two years after it was amalgamated into the newly independent country of Malaysia. For at least the first decade of independence, the city’s size -- it’s smaller than New York City and the only Southeast Asian nation without natural resources -- led to concerns about its viability as an independent state. The government fostered the development of electronics and chemical industries, promoted trade and drew overseas investment.

In the U.K., lawmakers of all stripes have cited Singapore as a post-Brexit model for good and bad.

For Britain to thrive, its "post-Brexit model should exactly be Singapore, a tiny country devoid of natural resources but with a booming economy," Conservative politician Owen Paterson said in a column in the Telegraph last year.

By contrast, Shadow Chancellor John McDonnell said on Sky News on Oct. 28 that the government was trying to mimic “Singapore, a sort of tax haven which would undermine our manufacturing base.”

Singapore will adopt a “short-form deal” with the U.K. when it leaves the EU where ties between the two will remain status quo until both can work out a “more substantive solution,” Lee said.

To contact the editors responsible for this story: Stephanie Phang at sphang@bloomberg.net, Simon Kennedy