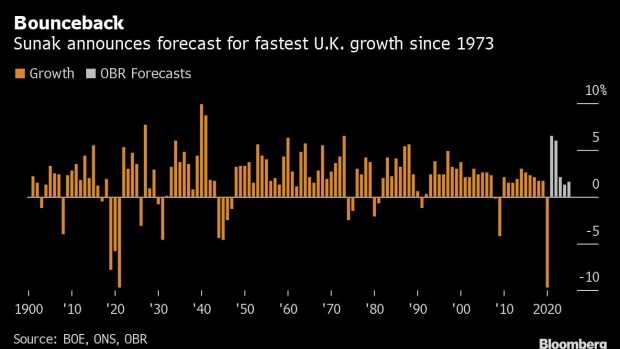 Rishi Sunak, U.K. chancellor of the exchequer, departs from number 11 Downing Street with his ministerial dispatch box on his way to present his spending review in Parliament in London, U.K., on Wednesday, Oct. 27, 2021. Sunak is set to lay out the government's autumn budget with new forecasts from the Office of Budget Responsibility. , Bloomberg

U.K. Chancellor of the Exchequer Rishi Sunak unleashed 75 billion pounds ($103 billion) of giveaways in a budget that defied predictions for fiscal restraint, pinning the path of future spending to predictions for a rapid economic growth.

Sunak slashed taxes for pubs and restaurants, cut duties on alcohol and handed more income to some of the nation’s poorest families in a statement to Parliament on Wednesday. He also earmarked billions of pounds more for infrastructure, education and worker skills, boosting the budget for every government department.

The unexpected largess outlined in plans that stretch to 2027 rely on the biggest upward revision in the outlook for the economy in four decades of forecasting. The measures may add to inflationary pressures that the Bank of England is keen to check, with financial markets anticipating the first post-pandemic rate rise next week.

“This was another high spending budget from a government which continues to use most of its available headroom to increase expenditure rather than to cut taxes,” said Mark Littlewood, director general at the free-market research group the Institute of Economic Affairs. “The chancellor is banking on strong economic growth to sustain the many additional billions of pounds of spending he has pledged.”

The Office for Budget Responsibility predicted nominal gross domestic product -- the key driver of tax revenue -- will be 4.1%, or 110 billion pounds, higher in 2026 than it had forecast in March. That’s a result of faster growth and higher and more persistent inflation. Its estimate for economic scarring a result of the pandemic was revised down to 2%, from 3% in March.

That windfall from the OBR allowed Sunak to boost spending while he cut the outlook for borrowing, helping him to stick to his pledge to bring order to the public finances -- something he calls his “sacred duty.”

Spending commitments announced on Wednesday remain far below the massive stimulus unleashed during the pandemic. Nonetheless, the new money came as a surprise from a chancellor who was expected to tighten the purse strings and save more fiscal ammunition for the runup to the next election, which must be held no later than 2024.

Inflation is also growing. The OBR expects price growth to average 4% next year, the most in three decades and double the BOE’s target. BOE Governor Andrew Bailey has said policy makers will have to act to contain inflationary forces, prompting financial markets to anticipate an interest rate increase either next week or just before Christmas.

The danger is that continued spending will push inflation even higher, boosting the cost of servicing the U.K.’s record debt load and squeezing household finances. Consumer confidence plunged in recent months, reflecting a surge in energy prices and shortages of everything from food to fuel.

The OBR said the prospects for higher inflation and interest rates have already climbed in a “fiscally material” manner since it compiled its forecasts, although not by enough to impact Sunak’s new fiscal rules. The chancellor vowed that in “normal times” the government will only borrow to invest and that underlying public sector net debt must be falling as a percentage of output.

The Treasury expects borrowing to fall 150 billion pounds over the course of its outlook when compared with March forecasts. Debt servicing costs will increased by 51.5 billion pounds. Previously announced increases in corporation tax and National Insurance -- which take the overall tax burden to the highest since the 1950s -- also provided more room to spend.

“It’s hard to understate how much revenue the chancellor’s raised over the past couple of months,” said Richard Hughes, chair of the OBR. “The combination of corporate and personal tax rises announced in March, September and in this budget, means that this chancellor’s announcing more tax rises this year than in any single year since Norman Lamont and Ken Clarke’s 1993 budget.”