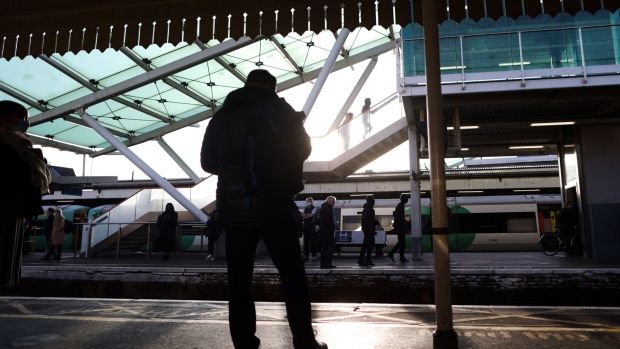 Commuters wait for a train on a platform at Clapham Junction railway station in London, U.K., on Monday, Oct. 11, 2021. Two Bank of England officials moved to reinforce signals of an imminent rise in U.K. interest rates to curb inflation, with one telling households to brace for a "significantly earlier" increase than previously thought. Photographer: Chris Ratcliffe/Bloomberg , Bloomberg

(Bloomberg) -- Eight in 10 U.K. companies struggled to find workers last month despite many of them increasing wages, according to a survey that shows labor shortages are intensifying.

The proportion was up sharply from three months earlier, with the squeeze most pronounced in the catering and hospitality sectors where 92% of firms that attempted to recruit reported difficulties, the British Chambers of Commerce said Wednesday.

“It’s clear that staff shortages are worsening, impacting on recovery and growth for manufacturers and services businesses alike,” said Jane Gratton, head of people policy at the business lobby group. Unless the government takes action, companies face “extreme difficulty in meeting demand, and consumers will see further reductions in the goods and services available to them as we progress into winter.”

In a sign of how critical the issue has become, many companies said they raised salaries and still failed to entice workers, according to the survey, which questioned more than 5,600 firms between Aug. 23 and Sept. 13.

The combination of staff shortages and supply-chain disruptions are pushing up prices, adding to a squeeze on living standards and increasing pressure on the Bank of England to increase interest rates to tame inflation.

The problem reflects both the pandemic and Brexit, with companies discovering there are now far fewer foreign nationals to help fill a record number of vacancies. The BCC urged the government to address the crisis by issuing more short-term visas for industries facing acute shortages.