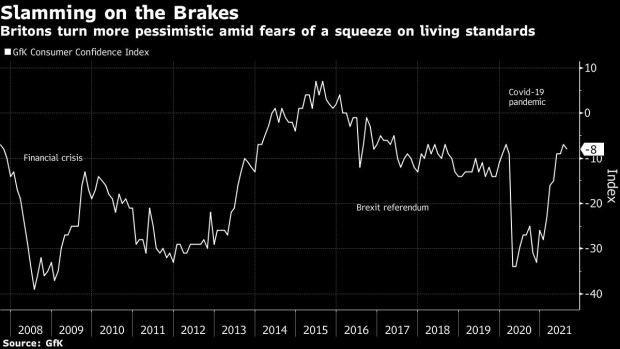 (Bloomberg) -- U.K. consumer confidence fell at its sharpest pace since coronavirus lockdown rules were tightened almost a year ago, reflecting a surge in inflation and looming tax increases.

September’s 5-point drop to minus 13 was the biggest decline since October 2020, according to data from the market research firm GfK. It came amid fears of a “potential cost of living crisis,” with households facing surging food and fuel costs, the end of furlough benefits and a 12 billion-pound ($16.5 billion) tax raid from April to pay for health and social care.

“Consumers are clearly worrying about their personal finance situation and the wider economic prospects,” said Joe Staton, client strategy director for GfK. “When consumer confidence drops, shoppers tend to spend less. This dampens the overall economic prospects. This really is an unwelcome picture.”

The figures add to a darkening outlook for the U.K. economy after official figures showed the recovery stalled in July and a survey of purchasing managers indicated the weakest growth in seven months in September. The Bank of England yesterday raised the prospect it may raise interest rates as early as November, saying inflation is likely to reach more than double its 2% target in the next few months.

A splurge in spending that came with looser coronavirus rules starting in April has given way to more moderate levels of activity. At the same time, supply-chain issues exacerbated by Britain’s departure from the European Union have made stocking retailer shelves and manufacturing cars more difficult.

GfK said all measures of its survey fell in September, with the outlook about the general economic situation showing the sharpest decline. Consumers were less willing to make major purchases, “depressing news for hard-pressed retailers looking to build sales as they go into the key holiday period,” GfK said.