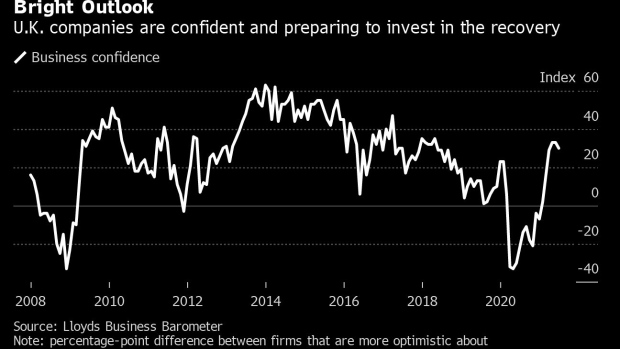 Britain’s construction industry is struggling to keep up a surge in demand for new building work, complaining that a shortage of skilled workers and supplies is holding up projects.

Four in five construction firms surveyed by the Royal Institution of Chartered Surveyors say building material shortages are constraining activity, and two-thirds are finding it difficult to hire bricklayers and carpenters. So-called ‘white-collar’ professionals include quantity surveyors are also increasingly unavailable, according to the survey.

The findings indicate headwinds weighing on the pace of recovery in the construction industry as well as the wider economy. Loosening pandemic rules have unleashed pent-up demand while companies are struggling to reactivate workers they put on furlough.

Construction output fell unexpectedly in April and May after a boom earlier in the year, official government data show. The RICS report indicates that while the broader outlook for growth remains positive, constraints on the industry are continuing to weigh on momentum.

Labor shortages have become especially acute in the U.K. since the nation exited from the European Union, decreasing the pool of skilled workers. The number of EU construction workers has halved in the last four years, and contractors who laid off staff during lockdowns are struggling to hire them back.

Builders expect the cost of materials to rise by over 10% over the next year. According to a separate survey, wage growth expectations are highest in the construction industry along with transport and hospitality.

Despite mounting pressures and slumping growth in April and May, construction output is expected to rise 13.7% this year and 6.3% in 2022, according to the Construction Products Association. A surge in U.K. homebuilding helped propel construction activity to pre-pandemic levels in the first months of 2021 after total output plummeted 44% between February and April last year.