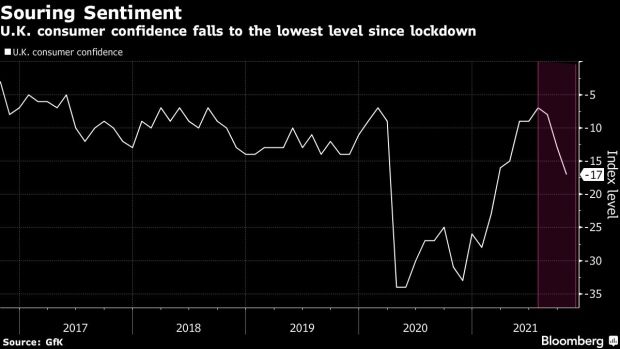 U.K. consumer confidence fell in October to the lowest level since the country was stuck in lockdown as a powerful combination of surging inflation, food and fuel shortages and climbing Covid-19 cases left people increasingly worried about their future.

GfK said its gauge of sentiment dropped four points from September to minus 17, the lowest since February, amid mounting concerns about an impending cost of living crisis.

Confidence in the outlook for the economy saw the biggest collapse. Households also braced for expected interest-rate increases from the Bank of England and were less willing to make major purchases -- a worrying sign for retailers ahead of the crucial Christmas period.

Souring sentiment threatens to hamper the U.K’s recovery, which is already showing signs of petering out. The situation may deteriorate further, with soaring energy prices, looming tax hikes and a removal of some virus-related support programs threatening to squeeze family budgets.

“Against a backdrop of cheerless domestic news, it is not surprising that consumers are feeling down-in-the mouth about the chilly winter months ahead,” said Joe Staton, client strategy director at GfK. “The financial mood of the nation has changed and consumers could do with some strong tonic to lift their spirits.”

Read More: Britain’s Economy Finds Out What It Means to Live With Covid