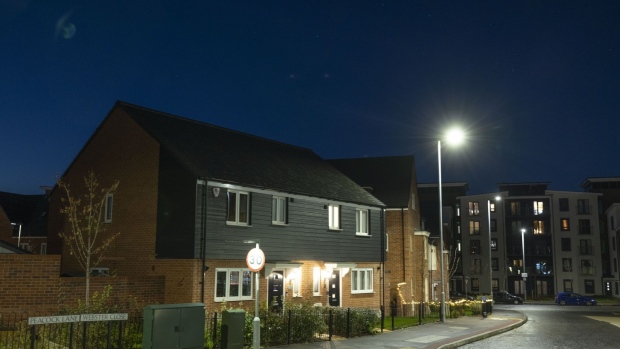 Residential homes in Woking, U.K., on Monday, Dec. 6, 2021. U.K. households, already bracing for their energy bills to rise by “several hundred pounds,” will see a further jump following the collapse of Bulb Energy Ltd. and other suppliers, the regulator said. , Bloomberg

(Bloomberg) -- The cost of keeping the lights on for U.K. consumers is set to almost double after the government expanded its target for the amount of power capacity it has ready for next winter.

Prime Minister Boris Johnson’s administration on Tuesday set a target of 5.36 gigawatts for the year-ahead capacity auction. With the pool of bidders being about the same size, the price is likely to clear at the maximum level of 75 pounds ($101.41) a kilowatt, according to BloombergNEF. That will cost 402 million pounds, almost the same as an auction 10 times bigger held four years in advance.

The capacity market -- a mechanism designed to guarantee there’s enough energy available to keep the lights on -- is paid for by U.K. consumers. The cost is usually about 14 pounds per household, according to government figures, but that level is set to double at a time when bill payers are being squeezed by a cost of living crisis, driven in part by huge rises in wholesale energy prices.

“It defeats the purpose of having an auction,” Andreas Gandolfo, an analyst at Bnef said. “It’s a massive and expensive safety net.”

The auction will be held next month with bidders competing for contracts starting in October. Conventional power stations can participate alongside producers of renewables, storage owners and operators on the demand side. The target was increased after it became clear that some stations with a four-year contract were now unable to fulfill their obligations.