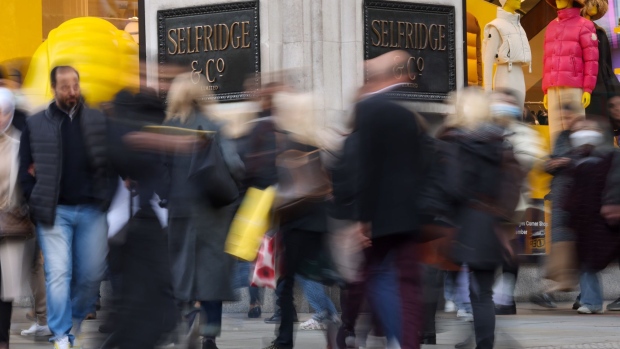 Pedestrians pass Selfridges & Co. Ltd. department store on Oxford Street in London, U.K., on Wednesday, Nov. 17, 2021. The U.K. Office for National Statistics are due to release their latest retail figures on Friday. , Bloomberg

U.K. consumers took on unsecured loans at the fastest pace since the aftermath of the first lockdown, adding to signs that people are becoming more willing to spend.

The data suggest consumer confidence remained buoyant in October, which may reassure Bank of England policy makers that the economy is strong enough to cope with an interest-rate increase next month. The central bank is expected to hike rates on Dec. 16 to tame above-target inflation, though the decision is seen as finely balanced with a new strain of coronavirus adding to the uncertainty facing the economy.

Still, there are few signs that is translating into higher mortgage costs. Separate BOE figures showed the efffective rate on new secured loans fell to 1.59% in October, the lowest on record, suggesting competition between lenders remains intense. That belies concerns that banks were starting to hike mortgage costs before the BOE acts.

Mortgage lending data showed signs of weaker activity following the end of a tax break on property purchases on Sept. 30. The value of loans advanced fell to 1.6 billion pounds and loan approvals declined to 67,199, the lowest since last June.