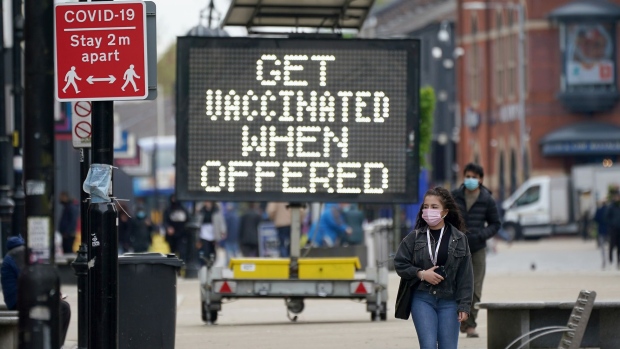 BOLTON, ENGLAND - MAY 26: People shop and go about their daily life in Bolton town centre as surge testing and rapid coronavirus vaccinations continue on May 26, 2021 in Bolton, England. The UK government amended earlier advice asking people to avoid non-essential travel to and from Bolton and seven other places in England experiencing spikes in Covid-19 cases. New guidance asks that people minimise travel to such places, whose local authorities were largely surprised by the initial rule change, published without fanfare on a government website on May 14. (Photo by Christopher Furlong/Getty Images) , Photographer: Christopher Furlong/Getty Images Europe

(Bloomberg) -- U.K. infections of Covid-19 continued to rise, posing a dilemma for Prime Minister Boris Johnson ahead of a crunch decision Monday on whether to proceed with the final stage of reopening the economy later this month.

Data released Friday by the Office for National Statistics showed an estimated 1 in 560 people in England had the virus in the week to June 4, up from 1 in 640 a week earlier and 1 in 1,340 in the week through May 8.

The month-long rising trend has been fueled by the faster-spreading delta variant of the virus first identified in India, which now accounts for more than 90% of infections in the U.K. The number of confirmed cases of the strain tripled in a week to 42,323, Public Health England said Friday.

The growing numbers have led ministers to discuss options including delays ranging from nine days to a month for the planned reopening on June 21, and allowing some relaxations to go ahead and others not.

“Let’s not squander those hard-fought gains” in the fight against the virus, Vaccines Minister Nadhim Zahawi told BBC radio on Friday. “The virus hasn’t gone away, it will attempt to survive by mutating.”

The ONS data also showed rises in the caseload in Scotland and Northern Ireland, with a decline in Wales.

While Zahawi said the government would continue to assess the data over the weekend, his remarks suggest a delay to the planned easing is likely. That will put Johnson in direct conflict with prominent members of his Conservative Party, for whom the June 21 “Freedom Day” has become totemic.

But with Chancellor of the Exchequer Rishi Sunak among those prepared to accept a delay, a key hurdle has been removed for the premier if he decides the data now warrant one. In March, Sunak extended key economic support for workers and businesses through to the end of September to allow for delays to the government’s “roadmap” for unlocking the economy.

The government had been optimistic that one of the world’s most advanced vaccination programs would allow the U.K. to drop social-distancing measures altogether on June 21, including the requirement for pubs and restaurants to only provide table service, limits on theater, concert and sporting audiences, and restrictions on the number of attendees at weddings. Under the plans, nightclubs would be allowed to reopen for the first time in 15 months.

Now the tone is shifting. Ministers are shuffling options including continued wearing of masks in enclosed indoor spaces, ongoing social-distancing rules, and limits on numbers gathering indoors or outdoors, according to people familiar with the matter.

It was always the case that the dates in the four-step plan for reopening the economy were the earliest possible days when relaxations could take place. But after the first three steps were able to go ahead on schedule, the new variant has put the final stage at risk.

“It’s really important that we try and open up our economy again, because the economic damage is immense,” Former Prime Minister Tony Blair told Bloomberg TV on Friday. He suggested the relaxation of rules should go ahead -- at least for those that are vaccinated.

There was some positive news for the government: Zahawi said the link has been broken between coronavirus cases, and hospitalizations and deaths. He said cases went up by 63% last week, with hospitalizations rising 7% and deaths up by 1.9%.

“These have been hard-won battles against the virus,” he said.