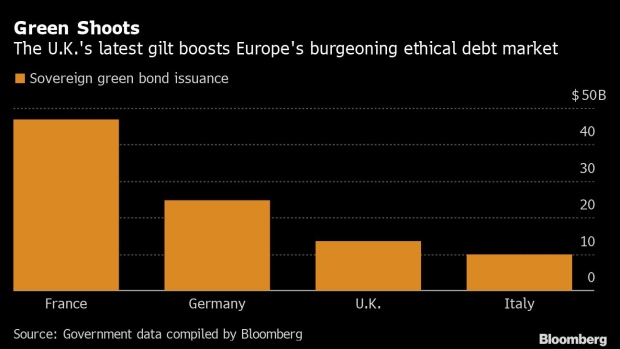 (Bloomberg) -- The U.K.’s record-breaking debut green bond sale has given debt chief Robert Stheeman conviction on the benefits of an environmental borrowing program.

Any previous doubts were quelled by the lower costs -- or “greenium” -- Stheeman said the country achieved. The 10 billion-pound ($13.7 billion) deal this week was the biggest-ever ethical bond sale and the country is already planning another offering next month.

“We were able to achieve excellent value for money for the taxpayer,” Stheeman, who has been head of the Debt Management Office for nearly 20 years, said in an interview. “There’s been a huge movement in this market over the last 12 to 18 months alone.”

The focus for Stheeman is now turning to issuing green gilts in different maturities to draw in a wider range of investors and to establish a green yield curve. The U.K. has planned a second sale in the 20- to 30-year maturity range next month, which he hopes will appeal to the “traditional core domestic U.K. gilt investor base” of pension funds and insurance companies.

“In order to make any market both significant and liquid, and really serve as a benchmark, we need to be able to issue sizeable amounts,” he said.

The crucial limiting factor on more green debt issuance is mainly a lack of feasible green projects, he added. The U.K. currently has earmarked 15 billion pounds for green bonds during the current fiscal year. That will still leave it behind peers such as France and Germany, amid a boom in global environmental sales.

Politicians and investors in the U.K. had stepped up the pressure to start issuing green bonds ahead of the country hosting a major United Nations climate change conference in October.

For any further issuance, Stheeman favors offering “diversity” for investors by using green bonds to fill out parts of the gilt curve currently not offered. He said the nation rejected the approach of Germany, which is twinning green bonds with conventional bonds of the same maturity.

“We are trying to make our green gilt program complementary rather than mimic the other program,” he said. “Otherwise, you’re going to have a constant comparison between two different instruments.”