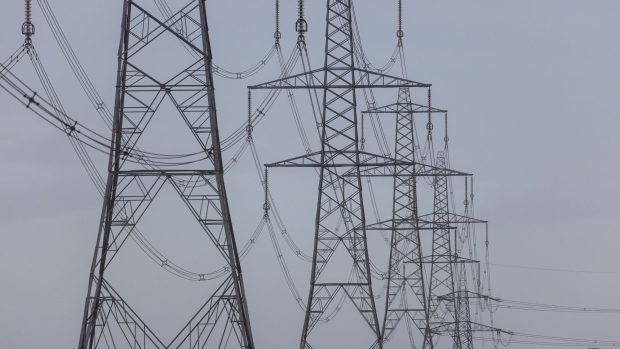 Electricity transmission pylons on the Isle of Grain near Rochester, U.K., on Monday, Jan. 3, 2022. Natural gas prices in Europe started the year extending the sharp drop seen in the last month as rising flows eased concerns that supplies could lack during the winter. Photographer: Chris Ratcliffe/Bloomberg , Bloomberg

(Bloomberg) -- The U.K. declined to give final approval for a 2,000-megawatt power cable to France that’s being developed by Aquind Ltd.

Business Secretary Kwasi Kwarteng refused to grant a development consent order, the final stage in the planning process, according to a letter published on the National Infrastructure Planning website.

The project was supposed to be operational by 2021 but has been beset by delays. It’s being privately-funded, which isn’t common. Interconnectors tend to be financed and operated by the regulated network companies in both countries.

Interconnectors provide a source of low-carbon power since they give adjacent countries access to resources such as wind or hydropower. Britain wants to more than double existing capacity by 2030 to support its target of quadrupling offshore wind by the same date.

The U.K. delayed giving the final sign off for the project in October and requested more information before approval.

Aquind is jointly owned by Alexander Temerko and Victor Fedotov. Temerko is a large Conservative party donor, according to the BBC, and the association has caused controversy. The company says that Fedotov has no association with the party.