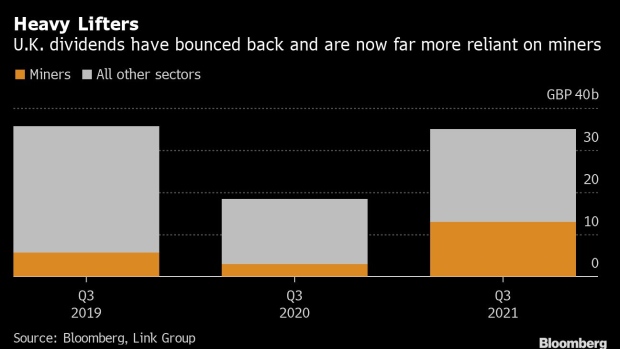 U.K. dividends soared in the third quarter, but are becoming increasingly reliant on the volatile energy and mining sectors.

Those are the findings of a new report that shows so-called extractive industries will account for almost a third of British company payouts in 2021.

After slumping in the immediate aftermath of the pandemic, U.K. dividends rose 89% to 34.9 billion pounds ($48 billion) in the third quarter on a headline basis, according to the report. Most of the jump was due to the mining boom and some large special dividends, while payouts by oil firms were boosted by the sharp rebound in crude prices.

According to the report, U.K.-listed miners paid out 12.8 billion pounds in the third quarter, more than the next five largest sectors combined. Given the industry’s inherent cyclicality, the companies are no longer operating progressive dividend policies, meaning payouts will rise and fall with the commodity cycle, Link Group said.

A potential headwind for U.K. dividends in 2022 will be the pending exits from the London market of BHP Group and Wm Morrison Supermarkets Plc, which will leave a 4.9 billion-pound hole in total distributions, according to Link. Adjusting for this impact, British dividends are still expected to grow again next year, as bank payouts return to full strength, it said.

“The improving picture suggests underlying dividends may regain their previous high by the end of 2024, a year sooner than we penciled in at the beginning of this year,” Link Group said.