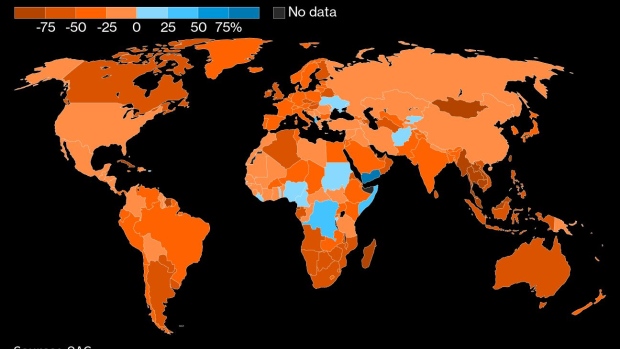 Travelers in the baggage check hall in Terminal 3 at Orly Airport, operated by Aeroports de Paris, in Paris. , Bloomberg

(Bloomberg) -- Fully vaccinated visitors arriving in England from France will no longer have to isolate for 10 days, a loosening of restrictions that puts them in the same category as travelers from most other European countries.

The U.K. also eased rules for arrivals from India, Bahrain, and travel hubs the United Arab Emirates and Qatar. Those countries will move from the U.K.’s highest-risk “red” list to its medium-risk “amber” list, meaning arrivals will no longer need to quarantine in a government-approved hotel.

Six other European nations, including Germany, were added to the lowest-risk “green” list, meaning all visitors can avoid quarantine whether or not they are fully vaccinated. All changes will come into effect from 4 a.m. on Sunday, Aug. 8.

Spain and all its islands -- key summer holiday destinations for British tourists -- will remain on the amber list, but travelers are advised to get take a lab-processed PCR test before departing to the U.K.

The British government was under growing pressure from French ministers, as well as airlines and tourism bodies, to overturn its decision last month to put France in a newly created “amber-plus” category.

France was the second most-visited country by Britons before the pandemic, with low-cost carriers including EasyJet Plc offering dozens of flights per week. The surprise amber-plus restriction in July came just as school holidays began in the U.K.

While airline travel has rapidly rebounded in Europe, the U.K.’s evolving restrictions deterred many in Britain from booking overseas trips. Seat capacity in the U.K. this week was 42% of 2019 levels, compared with 68% for the wider European region, according to data from OAG.

The latest announcement is a boost for carriers such as EasyJet, along with long-haul specialists British Airways, Virgin Atlantic Airways Ltd., Emirates and Qatar Airways. Airlines have been clamoring for restrictions to be dropped in order to generate vital cash.

The Department for Transport said Wednesday that the declining proportion of French Covid cases from the beta variant, which may be more vaccine-resistant, meant it would now be moved back to the amber list.

Germany, Austria, Slovenia, Slovakia, Latvia, Romania and Norway were added to the lowest-risk list, allowing quarantine-free travel. People returning to England from a green or amber country must take a Covid-19 test before departure and book a test for day two after arrival.

Transport Secretary Grant Shapps said: “While we must continue to be cautious, today’s changes reopen a range of different holiday destinations across the globe, which is good news for both the sector and traveling public.”

Initially, the changes will apply only to England, although other regions of the U.K. are expected to follow the same regime.

Karen Dee, chief executive of the Airport Operators Association, welcomed the additions to the green list but said more work was needed.

“We remain a long way off a full and meaningful restart of international travel and the government must recognize this and provide the support that will protect our world class aviation industry and the thousands of jobs that remain at risk,” Dee said in a statement.

Under rules introduced Aug. 2, all fully vaccinated travelers from the U.S. and European Union can avoid isolation on arrival into the U.K. France was not initially included in this due to concerns over the beta variant.

Visitors from other amber-list countries, as well as those who are not fully vaccinated, need to self-isolate for 10 days. That period can be shortened if they pay for an extra test on day five.

Georgia, Mexico, and the French islands of La Reunion and Mayotte were added to the U.K.’s red list from Aug. 8, the government said, because of the risk from variants or high prevalence of the coronavirus. Only people with U.K. residency rights can enter from red-list nations, and everyone must quarantine for 10 days in a hotel.