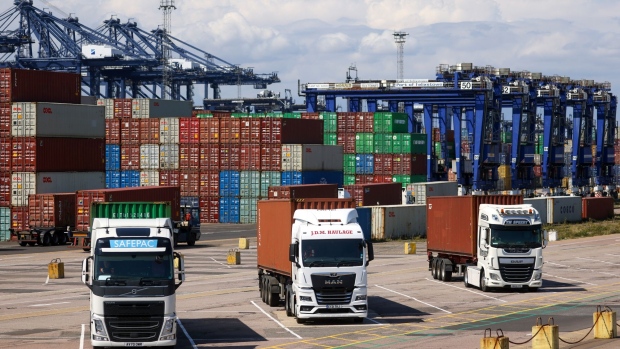 Trucks with shipping containers on the dockside at the Port of Felixstowe Ltd. in Felixstowe, U.K., on Tuesday, Aug. 3, 2021. The giant container ship that had blocked Egypt's Suez Canal for nearly a week earlier this year was released on July 7 following an agreement between authorities and the vessels owners. , Bloomberg

The U.K. economy emerged from the winter lockdown more strongly than previously estimated, but the recovery is already running into trouble.

Gross domestic product rose rose 5.5% in the second quarter instead of the 4.8% previously estimated, Office for National Statistics figures published Thursday show. The increase, which reflected the reopening of stores and the hospitality sector, left the economy 3.3% smaller than it was before the pandemic struck.

Government spending, exports and business investment were all stronger than previously estimated by the ONS.

Hopes that the shortfall might be made up this year are fading, with consumers and businesses facing the twin headwinds of accelerating inflation and supply chain problems. Bank of England Governor Andrew Bailey on Wednesday said that output is unlikely to recover its pre-pandemic level until early next year, later than officials predicted in August. The BOE last week sharply downgraded its third-quarter growth forecast to 2.1% after firms faced shortages of workers and materials and a resurgence of coronavirus cases made consumers more reticent about spending. Economists say its 2% forecast for the final three months of 2021 is looking increasingly optimistic.

Separate ONS figures showed that consumers saved 11.7% of their income in the second quarter. The ratio was down from a revised 18.4% in the first quarter, when the country was under a third national lockdown to contain the coronavirus. That’s above levels of less than 7% prior to the pandemic.