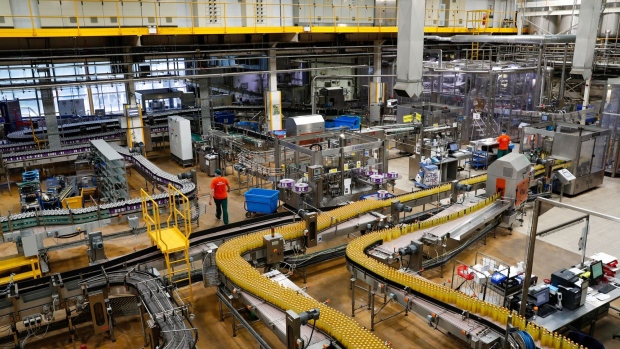 (Bloomberg) -- The U.K. economy grew less than expected in February after industrial production and construction shrank.

The 0.1% expansion followed a robust 0.8% gain in January, Office for National Statistics figures said Monday. Growth of 0.2% was forecast by economists. It left output 1.5% above its level in February 2020, before the pandemic struck.

Manufacturing dropped unexpectedly, driven by shortages that held up output from carmakers. That reflects turmoil in global supply chains left over from the pandemic that’s likely to worsen with the war in Ukraine.

Construction also fell in the month, driven solely by a decrease in repair and maintenance work. New business increased slightly.

The rise in GDP, which reflected continued easing of coronavirus restrictions, leaves Britain on course for growth of around 1% in the first quarter. However, that may be a high-water mark, with soaring energy bills and inflation set to deliver an unprecedented hit to living standards this year.

The pressure facing households was underlined by the latest Bloomberg monthly survey, published Monday. Economists now expected inflation to peak at 8.1% in the second quarter, up from a previous forecast of 7.6% and the fastest quarterly rate since 1991.

The Bank of England is forecast to deliver two further rate hikes this year, taking benchmark borrowing costs to the highest since the financial crisis. Growth is expected to average 0.3% a quarter for the rest of the year.

Growth in February was led by service industries, which expanded 0.2%. Hospitality and tourism benefited from the easing of Covid restrictions. Vaccinations and testing fell during the month, weighing on the health care sector. Also dragging on services was the retail sector, where sales declined.

Exports to the European Union, excluding precious metals, swung to growth of 7.8% in February from a 20.5% decline in January. It was driven by a 25.4% increase in exports to the bloc, and a 3% drop in imports from the EU.

The ONS advised caution in interpreting the exports data due to a change in the methodology for data collection, but added: “Current investigations indicate the continued strong level of imports from the EU is predominantly the result of genuine increases in trade.”

The ONS said it was too early to see the effect of Russian sanctions on U.K. trade after they were imposed on Feb. 24.