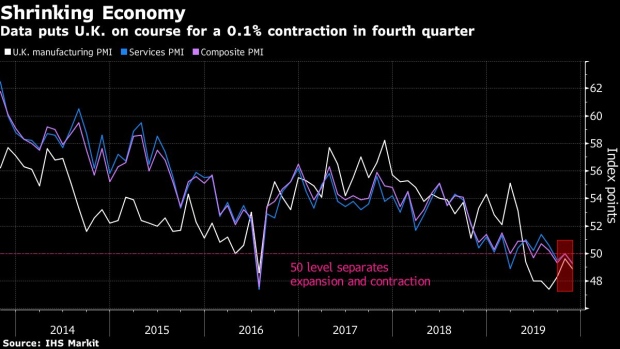 The U.K.’s dominant services sector was the weakest since March last month as new work dried up.

With the nation under a cloud of political uncertainty from Brexit and the looming election, IHS Markit’s Purchasing Managers Index for the industry fell to 49.3 in November, the firm said Wednesday. That’s a slightly shallower slowdown than indicated by a flash estimate of 48.6.

Still, the assessment of the economy remains bleak, with the firm saying its composite reading was consistent with a 0.1% quarterly contraction.

To contact the editors responsible for this story: Paul Gordon at pgordon6@bloomberg.net, Brian Swint